If last year’s massively successful “The Farewell” taught the film industry anything, it’s that American audiences have an appetite for stories that haven’t been seen before. Lulu Wang’s debut feature was a major boon for Asian-American indie film, and Wang’s success an inspiration to all marginalized filmmakers. While it may seem reductive to compare two films directed by Chinese-American women, both films revolve around a Nai Nai, the Mandarin word for “grandma.” Of course, where Wang’s Nai Nai was sweet and naive, the Nai Nai in “Lucky Grandma” is a grizzled, cantankerous chainsmoker — and a total badass.

The feature debut of filmmaker Sasie Sealy, “Lucky Grandma” is a wickedly entertaining dark comedy, steeped in the colors and characters of New York City’s Chinatown. This is precise and confident filmmaking, and if there is any justice in Hollywood, Sealy’s name will soon be as ubiquitous as Wang’s. Co-written with Angela Cheng, Sealy’s dynamic script is deeply funny, heartfelt, and with plenty of twists and turns to keep you on your toes. The film opens on a centered close-up of Nai Nai (Tsai Chin), cigarette dangling casually from her mouth, listening indifferently to the neighborhood fortune teller (Wai Ching Ho), who informs her she is in for a very lucky year. “Your lucky day is coming,” she says, even predicting the very date.

Almost immediately, Nai Nai is boarding a Chinatown bus to Atlantic City, unabashedly warning the trip organizer not to seat her next to a particularly gassy old man. Sealy films the diminutive Nai Nai next to various nameless men — a heavyset white guy who mansplains her at the roulette table, her well-meaning but oblivious son, the seatmate who passes out on her shoulder. The film is Nai Nai’s world, but nobody in it seems to pay her much attention. That is, until she nabs a bag of cash off a dead man (her sleepy busmate wasn’t a total wash after all), piquing the interest of the neighborhood mafia, known as The Red Dragon. 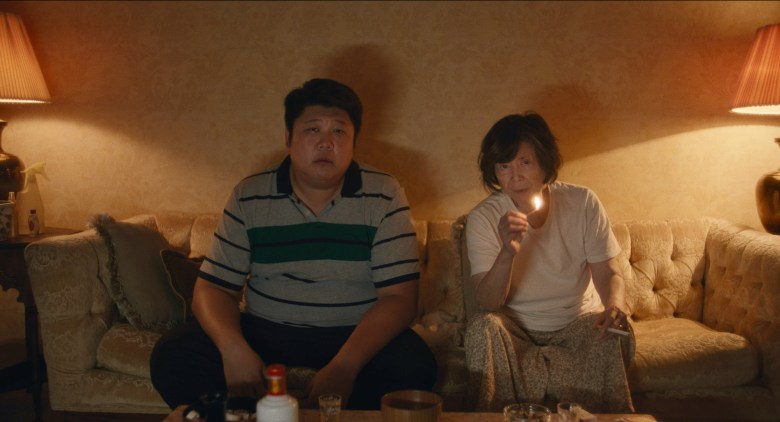 The narrative clips along at a breakneck pace, wasting no time on extraneous exposition or listless mood-building. Andrew Orkin’s versatile and expressive score enhances the sophistication, bringing subtle notes and flavors to the action. The music bodes ominously as gangsters interrogate Nai Nai, and easily transitions to a jaunty bop under Nai Nai’s post-jackpot Chinatown shopping spree. (The way Chin’s eyes widen at an ornate crystal chandelier is a masterclass in doing more with less).

While the plot is not overly complex, “Lucky Grandma” benefits from a compelling array of supplementary characters. There’s Big Pong (Hsiao-Yuan Ha), the innocent oafish bodyguard Nai Nai hires from a rival gang. He’s a little soft for a bodyguard, as evidenced by the way he gleefully pulls up a stool far too small for his large frame, excited to slurp up some fresh bok choy. He is regarded with curiosity by Nai Nai’s grandson Little David (the adorable Mason Yam), another standout who films himself flossing with a sassy white girl in cheetah leggings and a tank that reads “Always Hungry.” This hobby is inconsequential to the story, and that sassy friend never returns, but it’s a hilarious diversion, and a charming slice of Nai Nai’s world.

Chased by gangsters, accosted in a steam room, her apartment ransacked — Nai Nai’s luck runs increasingly thin as she sinks deeper and deeper into trouble. Was finding the money good luck or very bad luck? The luck theme weaves its way through the story with a light, if on-the-nose, touch. No matter; the film is so stylized that every menacing mention of the titular word feels justified. The film builds to a satisfying crescendo, with Nai Nai’s final lucky break laying bare what’s truly important.

By the film’s understated finale, she ends up moving into her son’s Brooklyn brownstone against her will, making her displeasure known by chastising him for placing a Buddha in front of where she’ll undress. “It’s disrespectful,” she tells him in Mandarin, though he answers in English. Disrespectful she can handle — just as long as it’s not bad luck.

Good Deed Entertainment will release “Lucky Grandma” in virtual cinemas on May 22.