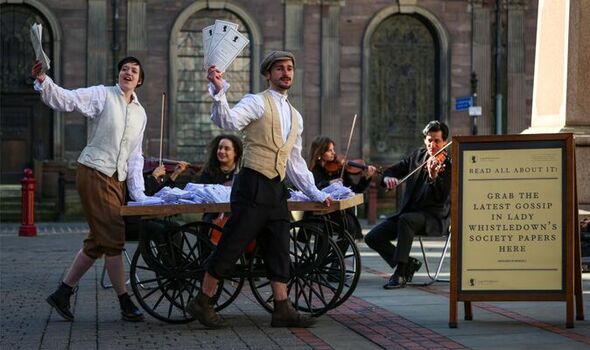 Drama abounded as Lady Whistledown’s infamous “Society Papers” were handed out to commuters in St Ann’s Square by Regency-era newspaper sellers, accompanied by a string quartet playing the Bridgerton soundtrack.

The gossip-soaked papers, made famous by the award-winning series, each contained a special golden ticket inviting people to apply for a chance to see the World Premiere of Bridgerton Season 2, at the Tate Modern, London, on March 22.

Just 15 lucky Manchester citizens (plus a guest each) will be crowned the diamonds of the season and offered the most desirable ticket in town.

For those living outside Manchester, there’s no need to fret. The Bridgerton-themed newspapers will be distributed across the UK, gracing Birmingham on March 19 and London on March 20 and 21.

The red carpet will also be streamed virtually on Netflix’s YouTube channel from 8pm on March 22.

Fans of the show are being asked to pay close attention to the Netflix UK social channels, as the exact locations of the newspaper distributors for the cities will be revealed there.

In the final minutes of the Season 1 finale, the true identity of local gossip monger, Lady Whistledown, was finally revealed to be none other than Penelope Featherington.

Played by Nicola Coughlan, this was seen to be one of the most surprising twists of the story so far.

The series has been a global smash hit for Netflix, with Shondaland bringing the decadent regency romp back for a second helping.

Season 2 follows Anthony Bridgerton, the eldest of the Bridgerton siblings, as he sets out to find a wife.

Anthony, looking for a match among the debutantes during social season, crosses paths with the Sharma family – and his subsequent courtship of Edwina Sharma leads to drama, chaos, and as ever, more gossip.

Bridgerton is a romantic, scandalous, and clever series that celebrates the timelessness of enduring friendships, families finding their way, and the search for a love that conquers all.

The series is inspired by Julia Quinn’s novels.