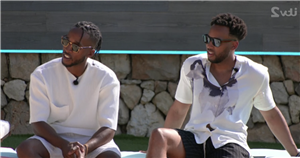 Love Love Island? Our Factor 50 email brings all the goss direct to your inbox

Faye Winter was left grovelling on Sunday night's Love Island after Teddy Soares' brothers called her "terrible" as they reacted to the pair's explosive argument.

Things got emotional on the hit ITV2 dating show as the Islanders' family and friends entered the villa to give their verdict on the final four couples.

While Millie Court and Liam Reardon, Kaz Kamwi and Tyler Cruickshank and Chloe Burrows and Toby Aromolaran's families championed their relationships, there was some frostiness between Faye and Teddy's.

Faye's sister Jo and best friend Sophie heaped praise on Teddy and expressed their pride in Faye's "growth" during her time in the villa, but Teddy's brothers Sidney and Carlos refused to tell their sibling what they thought of Faye.

Get exclusive Love Island stories and fabulous updates straight to your inbox with OK!'s daily Factor 50 newsletter. You can sign up at the top of the page.

When Teddy asked: "I'm very interested to know what you both think of Faye," Sidney admitted: "You know, it's hard for us to give you a good overview of what we think of her because, we're only seeing a slice of the situation.

"She is funny, she has got the chat, she is fire," he continued, before Carlos chipped in: "Does she think you're funny, by the way?," as the trio fell about in laughter.

Moments later, Faye, Jo and Sophie joined Teddy, Sidney and Carlos, where the brothers gave their reaction to the row – which has garnered over 25,000 Ofcom complaints.

Discussing how Teddy had made Faye his girlfriend, he said it felt like the right time "after the explosion."

Sidney added: "It was bad, it was very, very bad," as Carlos continued: "Really bad."

Faye apologised: "Yeah, I am really sorry about that, that was awful," as Sidney replied: "Bad is an understatement," leaving Faye wincing.

She then said in the Beach Hut: "Sidney and Carlos, I think they've got a few things they want to say to me."

Viewers took to Twitter to share their thoughts on the awkward moment, with one claiming: "You can tell teddy’s brothers can’t stand Faye."

A second wrote: "I also felt for Teddy's brothers who were clearly upset, disturbed and frustrated about the way #Faye treated #Teddy. Yet they know they're on camera so have to monitor what they say."

A third commented: "Sorry, teddys brothers hate Faye and they couldn't even hide it."

For the latest Love Island gossip, make sure to sign up to OK!'s daily celebrity newsletter and Factor 50 – your one stop for all the latest villa news.

Love Island concludes Monday at 9pm on ITV2 and ITV Hub. Episodes are available the following morning on BritBox.