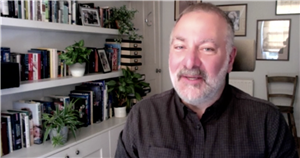 Line of Duty creator Jed Mercurio has teased the future of the hit BBC cop show.

Series six of the iconic police drama proved a massive hit with fans when it aired earlier this year, but with the final revelation of who the elusive H was, some fans were left disappointed.

Some even insisted it couldn't possibly be true, and there must be more to the story.

Now Jed has spoken about whether he will ever return to the world of Line of Duty – and it appears he wouldn't rule it out.

Louise Minchin and Jon Kay were on the red sofa attempting to tease out details of whether fans could ever expect a series seven of Line of Duty, as Jon asked: "What are you working on? Because you know what everybody wants to know!"

"Really I'm taking stock of what I'm gonna do next, so lots of things possibly in the pipeline and it's a very exciting time."

Louise wasn't letting him off the hook that easily, as she pressed: "Does one include Line of Duty?"

"Well, I think if Line of Duty fans propel [graphic novel] Sleeper to the top of the bestseller charts, I think that will say that there's a desire for more of my work, so that might motivate me!

"But currently there are no plans to answer that question seriously," Jed added.

It appeared Louise, however, had latched on to one key part of his admission, as she replied: "Okay, well, you have sort of given an indication that you wouldn't say no?"

Jed replied: "Look, I mean we're all so thrilled by the response to season six. It did so well and it's fantastic to be part of something like that, an absolute once-in-a-lifetime experience that the cast and I all really loved being part of.

"So, yeah, if there was a way, we'd obviously look at that seriously. But just being honest with you right now, we don't have a plan in place."

Jon immediately teased: "What about Line of Duty – the graphic novel?"

Jed had a giggle at that, but added: "You say that as a joke, but who knows?"

BBC Breakfast airs from 6am every day on BBC One.