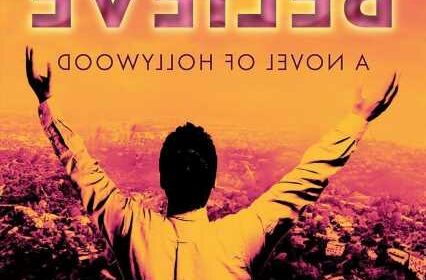 Tom Epperson and his wife Stefani Ames are leaving town, heading to Santa Fe in early May—another player from the movie era of the 90’s and early 2000’s soon gone.

They’ve been scattering for a while now, to Long Island, Palm Springs, D. C., Serbia, anywhere but Los Angeles. The local climate is still good. But the film industry, if that anachronistic term still applies, has been less than friendly to mature, seasoned talents who had mastered the art of making popular, grown-up, full-screen movies in a self-contained two-hour format. So they bail, a lot of them, figuring it’s better to start fresh somewhere else than to sit around a table at the Brentwood Country Mart, talking about what used to be.

Tom’s was never a household name. But he was very well known to executives, producers and directors who first encountered him as the more reticent half of a screenwriting duo universally referred to as “Tom and Billy.” Single-name status was a big deal in the 1990’s. Tom and Billy kind of had it, but you never mentioned one without the other. “Billy” was, and is, Billy Bob Thornton, who eventually carved out a separate career as actor, director, musician, singer and celebrity.

Tom remained a writer, racking up credits, often with Billy, on some well-remembered films, including One False Move, A Family Thing, and The Gift. He is a fine craftsman. Even the scripts that never got produced—e.g., those for prospective biopics of Otis Redding and Merle Haggard—had that professional aura that is somehow apparent in the first five pages of a serious screenplay.

Those who worked with Tom and Billy never pried deeply into their process. Billy was so skittish, he would never pitch a story twice in front of the same human being, including Tom. Tom, for his part, was reasonable, but no more prone to tolerate foolish notions. I once watched him sit silent while a famous actor’s manager asked for just one final polish, to include a handful of thoughts that were perceptibly aligned with core principles of Scientology.

“Nope,” said Tom, who, by my recollection, had worn sunglasses throughout encounter.

No explanation. No discussion. Just, “nope.” The film’s would-be financier, who was present, slammed the top of his desk so hard, the bottom fell out. “That was a good meeting,” he gasped.

Though I only met Tom and Billy in the 1990s, when we were working, together with Robert Duvall and his chief lieutenant Brad Wilson, on the Haggard project, I discovered a minor synchronicity with the two. We’re about the same age. If I remember correctly, we landed in Los Angeles at almost the same time, in 1982, they from Arkansas, I from Detroit by way of San Francisco. We were all three quite broke, and, as we later figured out, had inhabited shabby apartments within a block or two of each other, in the Palms district, in sight of what became the Sony lot. When nothing better offered, we’d grab dinner and drinks at the same local dive, D. B. Cooper’s, but never met. Fifteen years later, were finally inside the walls at Sony, up to our mutual necks in movieland craziness.

Tom and Stefani bought a house in Culver City, on the much nicer, other side of the lot. Eventually, he turned back to what he had always intended to do, that is, write novels.

His latest, called Make Believe, is about a screenwriter who comes from nowhere, but actually get somewhere in the awful, glorious churn of Hollywood as it was, only a few years ago. The book is very funny. But it is also painfully familiar—enough so that I had to wonder if those of us who spent decades of our lives in and around the late, great movie business had wasted our time on what was, perhaps, a dying culture.

Tom says not. As he summed up the good parts in an email: “Made a few movies I was proud of.  L.A. broadened the horizons of a small-town guy from Arkansas. I met people from all over the country and the world, including many terrific people.”

Plus, he got material for Make Believe.

Yeah, Tom and Stefani are leaving next month. But at least they left a good book behind.