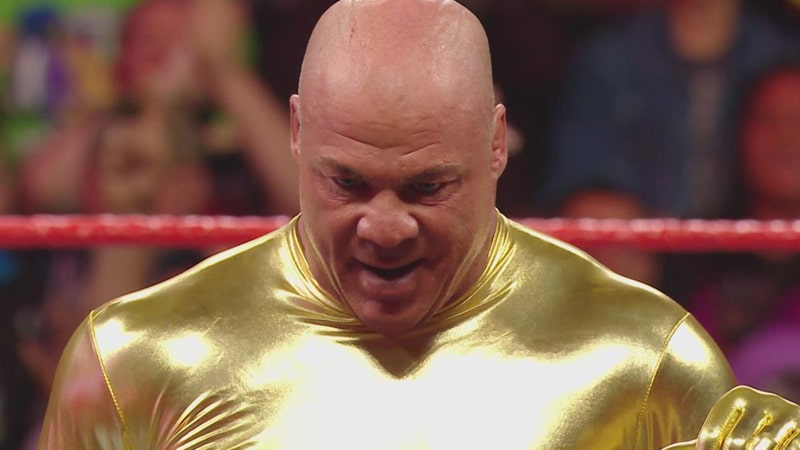 Kurt Angle has been out of the WWE since Stephanie McMahon sent him on a “vacation” and put Baron Corbin in charge of Monday Night Raw.

However, this week on Monday Night Raw, the Olympic gold medalist made his big return to the WWE as a surprise entrant in a battle royal.

Ever since Angle left the WWE for his forced “vacation,” Corbin has done everything he can to put himself over, including giving himself a Universal title match opportunity at one point against Roman Reigns.

The WWE is setting up their WWE Crown Jewel in Saudi Arabia for the first week of November and announced their World Cup tonight on Monday Night Raw.

Wrestlers from Monday Night Raw and SmackDown Live will compete in a tournament there and the first names were announced tonight. John Cena got in on his own and Baron Corbin said that he will get in by earning it in a battle royal.

However, the names in the battle royal were a bunch of nobodies and Baron Corbin. No one in the ring was more than enhancement talent, but one of the wrestlers was the legendary Conquistador, and he slipped out of the ring.

When Baron Corbin eliminated everyone, the Conquistador came back in, hit three German Suplexes and an Angle Slam before tossing out Corbin. He unmasked and it was Kurt Angle, who just earned a spot in the WWE World Cup at Crown Jewel.

Whether this sticks or not will play out over the next few weeks.

However, this is likely to lead to a rumored match at the Survivor Series in November. As we reported last week, the WWE wants to have a traditional Survivor Series match with the winner getting control of Monday Night Raw.

The teams will be captained by Kurt Angle and Baron Corbin, and this is likely the start to that WWE feud.