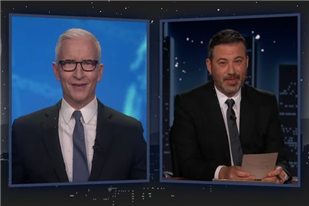 And the time Cheech Marin “destroyed” him during “Power Players Week”

Next week, Anderson Cooper joins the ranks of celebs who have taken on the role of “Jeopardy!” guest host following Alex Trebek’s passing. And to make sure Cooper, who previously competed on four games of “Jeopardy! Power Players Week,” is actually ready for his two-week turn behind the host podium, Jimmy Kimmel thought he’d make Cooper re-answer the questions he previously got wrong when he stopped by “Jimmy Kimmel Live!” Thursday.

And, as you’ll see the segment above, he gets two out of three correct this time around, which is good, because Kimmel says the “Jeopardy” producers were not going to let him host otherwise.

“I crushed it the first time,” Cooper told Kimmel of his “Jeopardy!” days, detailing how he crammed the night before his initial round on “Power Players.” “The second time, I was playing against Cheech Marin, and I was like, oh my God, this is going to be a cakewalk. I’ve seen ‘Cheech & Chong’ movies, the synapses can’t be firing that quickly. Turns out he’s the smartest guy, the quickest guy. He destroyed me. And do you know what it’s like to walk into the CNN news room the day after Cheech Marin has destroyed you on ‘Jeopardy’? Like, Wolf Blitzer reading the paper, giving you side eye as you walk by.”

Cooper will be the fifth famous face to serve as “Jeopardy!” guest host in the post-Trebek era, joining a lineup that has included Aaron Rodgers, Dr. Oz Mehmet, Katie Couric and Ken Jennings.

Also in his Thursday interview with Kimmel, Cooper and the ABC late-night host talked about how Andy Cohen “tried to kill” when he was unaware of his COVID-19 diagnosis in the early days of the pandemic.

“You were doing [‘Who Wants to Be a Millionaire?’] and this was days before the entire country shut down,” Cooper recalls. “And Andy and I, for reasons I’m still not quite clear on, flew out to Los Angeles to appear together on ‘Millionaire’ on the cusp of a global pandemic. And unbeknownst t0 you or I, Andy Cohen was already infected with COVID. I flew with him on a plane, he hugged me during the show on television, he got very close to you and then we flew back together!”