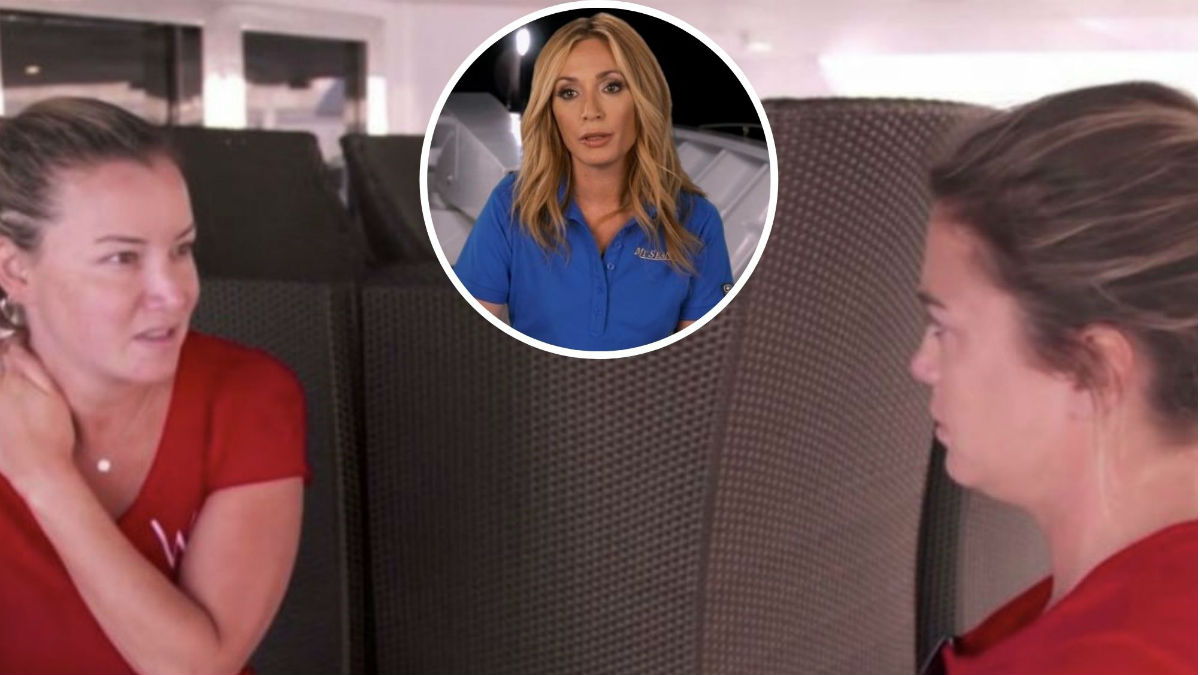 Kate Chastain has weighed in on the Below Deck Mediterranean cabin assignment fight between Hannah Ferrier and Malia White.

It was one of the hot topics on Kate’s recent episode of Watch with Kate. The limited series features Kate sharing her thoughts on the current season of Below Deck Med.

Fans have watched as the Below Deck alum continues to throw shade at Hannah. The two women have been feuding for nearly a year, or rather, at least Kate has been feuding. Hannah has stayed relatively silent regarding all of Kate’s hostility towards her, especially as she enters her final month of pregnancy.

Malia for the win

Kate was appalled Hannah was throwing such a fit about sharing a cabin with Christine Bugsy Drake.

“You’re being so difficult, Hannah,” Kate stated. “It does not matter who you room with. I don’t think I’ve liked a single roommate I’ve had on a boat ever. You’re not there building a pillow fort. Hannah and Bugsy, you will not be in the cabin at the same time!”

The Below Deck alum did think the fight was a wild one. Kate declared Hannah should just stop and let the couple share a cabin.

Viewers know that was not the case. Hannah stood her ground, and Malia went running to Captain Sandy Yawn to get what she wanted. Boy, have times changed. Malia is not too thrilled with the captain after the Cameo video leak.

Hannah wasn’t the only one Kate was blasting for the cabin assignment drama. Kate had some words for Bugsy too.

“This is so annoying because they’re like bonding over the fact that they don’t like each other. ‘Right? I agree! I agree too! You’re not signing a lease, ladies,” Kate blasted.

She's already won us over! Watch #BelowDeckMed with @Kate_Chastain for all the nautical puns your heart desires TONIGHT @ 9/8c!

She’s already won us over! Watch #BelowDeckMed with @Kate_Chastain for all the nautical puns your heart desires TONIGHT @ 9/8c!

The former chief stew also shared that Bugsy and Hannah would only be in the cabin at the same time to sleep. They had different schedules, which made them the perfect cabinmates.

There has been a lot of Kate slamming Hannah and chef Kiko on Watch With Kate, and fans have not been happy about it. Kate did defend her Below Deck Mediterranean commentary in a message to fans.

Kate Chastain is no holds barred. If she doesn’t like someone, then she expresses her opinions bluntly and honestly.

Teddi Mellencamp was recently reminded of the wrath of Kate. Yes, the former chief stew took time away from slamming Hannah Ferrier to shade Teddi instead.

Below Deck Mediterranean airs Mondays at 9/8c on Bravo.

Amy Duggar Shuts Down Troll Who Told Her to Have More Kids: Here Goes My Rant!

Will Emily in Paris Return For Season 2? Creator Darren Star Gave Us a Little Hope

Spoilers: Eileen gets Todd off the hook with gangster Mick in huge Corrie twist

'Dance Moms': Why Christi Lukasiak Isn't a Part of the 'Because Mom Said So' Podcast
Book News