Karlie Kloss wedding: Find out about her dress, Joshua Kushner’s net worth, and where the couple got married! 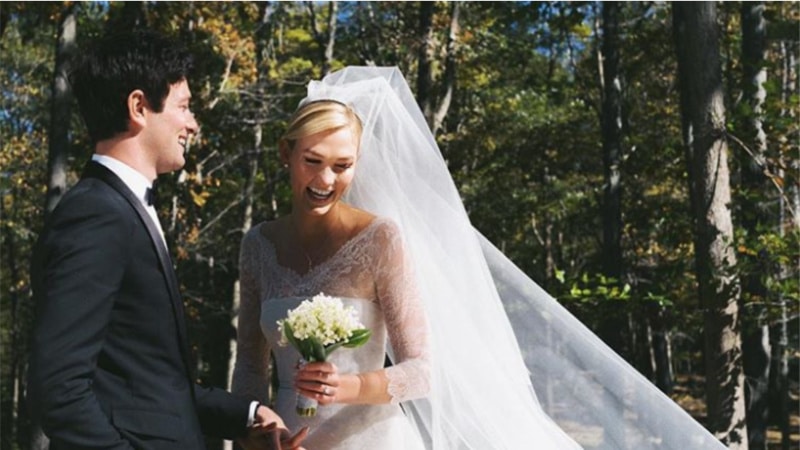 Karlie Kloss and Joshua Kushner got married Thursday evening in a beautiful and intimate ceremony.

The two tied the knot in a small Jewish ceremony and a picture she shared on social media indicate that it may have been an outdoor ceremony.

Just 80 people attended, but the couple plan on having a bigger celebration with friends and loved ones in the spring.

Where did Karlie Kloss get married?

The pair got married in upstate New York, which was the same place Joshua proposed to Karlie this summer. The couple announced their engagement in July.

“They’re both overjoyed and happily celebrating,” a source told PEOPLE at the time, adding, “Their hearts are full and they’re excited to build their future together.”

Karlie wore a stunning custom-made Dior wedding dress. It was a long-sleeved white wedding dress with the sleeves made out of lace. The lace overlay covered a white strapless bodice, making her look both elegant and timeless.

Karlie is often rather secretive about her life with Joshua Kushner, so it was a welcome surprise for fans when she posted a picture of their wedding on social media. When she got engaged, the news didn’t break until weeks later. The two had been dating for six years prior to the proposal.

“It’s not like I’ve ever wanted to be so secretive about my private life… Carolina Herrera always says, ‘A woman who’s an open book is boring.’ There’s no mystery anymore. I know in my life what really matters to me. I’m not trying to hide that from the world; I just really like having a more private private life… I’ve got nothing to hide, though!” Karlie has previously revealed about her private life for an interview with Porter, hinting that things won’t change now that she’s married.

No one puts on a show like @taylorswift ?✨ #ReputationTour Nashville was out of this world, I am SO proud of you ?

Who is Joshua Kushner, and what’s his net worth?

While Joshua Kushner’s older brother Jared Kushner may steal the headlines because of his marriage to Ivanka Trump and his role in the current White House, Joshua himself has an impressive career. He has grown his career behind the scenes, co-founding multiple profitable companies, including Oscar Health.

When he was 26, Forbes placed him on their 30 Under 30 list in finance. At that time, he was a managing partner at Thrive Capital. He went to Harvard for his MBA and reportedly managed to get investors like Princeton and Peter Thiel to commit $100 million to his private equity firm.

Because of his personal business ventures, Forbes estimates that the entire Kushner family has an estimated net worth of at least $1.8 billion, where Joshua’s cut is about $200 million. These figures are from 2014, so it’s possible that his net worth has fluctuated quite a bit since then. However, he’s obviously not struggling financially.