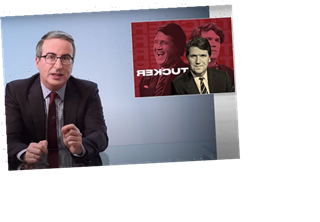 “‘I don’t burn crosses or lynch people, so I can’t be a white supremacist,’ is a pretty weak argument,” “Last Week Tonight” host says

John Oliver took Fox News host Tucker Carlson up on the request he made on his own show for somebody to “tell us in very clear language what a white supremacist is” by explaining on Sunday’s “Last Week Tonight” why Carlson himself is a white supremacist.

“OK, first, ‘very clear language’ seems like a high bar to clear for a man who spends 85% of his time making the befuddled face of a 13th-century farmer learning about bitcoin,” the HBO late-night host said, before he gave it a shot.

“‘I don’t burn crosses or lynch people, so I can’t be a white supremacist,’ is a pretty weak argument,” Oliver said, mocking the defense Carlson has used before. “It’s like saying, ‘I can’t be an antisemite because I didn’t do the holocaust.’ Or, ‘I can’t be a sexual predator because I didn’t produce “Good Will Hunting.”‘ There is more than one way to be a terrible person. And Tucker, conveniently for him, doesn’t fit neatly into a lot of people’s perception of ‘white supremacist,’ especially if they share his definition that it must require burning crosses, clan hoods and a name tag that says, ‘Hello, my name is a racist.’”

Oliver then showed a segment in which Carlson attacked Rep. Ilhan Omar for “hating America,” with the Fox News host saying, “We have every right to fight to preserve our nation and our heritage and our culture.”

“Wow, ‘preserve our heritage and culture’ — that is direct,” Oliver said. “In fact, his prewritten caption there, ‘We have to fight to preserve our nation and heritage,’ drew a lot of comparisons to the ‘Fourteen Words,’ the famous white supremacist slogan that says, ‘We must secure the existence of our people and a future for white children.’ And when you put the two together there is, you know, a slight similarity there.”

John Oliver said Carlson “is smart enough not to openly say into a camera that certain races are more deserving of scorn or less worthy of respect, he will just heavily imply that depending on who he’s talking about.”

“That is the whole thing with Tucker,” the HBO host said. “He might not say Black or white, he’ll insist that he’s for ‘colorblindness.’ He’ll build in deniability by phrasing things like a question like, ‘What does racism look like?’ while kind of embodying the answer. But when you put all of this together, the pattern is clear. He is scared of a country that looks nothing like the one he grew up in because diversity isn’t our strength, immigrants make our country poorer, dirtier and more divided, and any attempt to change that culture is an attack on Western civilization.”

He continued: “All of which is really just a long way of saying that when Tucker says, ‘What is white supremacy?’ the answer is, ‘Basically, that.’ It’s a belief that in a country where white people are dominant, that’s all down to their natural and innate abilities, and any effort to change that is an affront to the natural order of things.”

John Oliver closed his segment by explaining why Carlson’s less apparent brand of white supremacy “can actually be even more dangerous.”

“No one in their right mind would sit down, pop in their headphones and fire up David Duke’s podcast and think, ‘Hey, I’m not a white supremacist.’ But millions of people watch Tucker on TV every night, spouting well-laundered versions of pretty much the same talking points. And there is real harm in that,” Oliver said. “Because while white supremacy is clearly dangerous when promoted by self-avowed white supremacists, it can actually be even more dangerous when it isn’t. And what Tucker Carlson’s show sells, in addition to utterly terrible pillows, is very seductive. It’s the idea that this country is fundamentally colorblind, that anyone who mentions race is just trying to start trouble, that historic oppression is no longer relevant, and that, in fact, you, his viewers, are the ones currently being oppressed.”

He added: “And if he can sell his audience on his white-identity politics, if he can persuade them that the big existential threat to America right now is diversity, it sort of doesn’t matter if he says aloud what his preferred solutions to that might be. And while it’s bad enough to hear that white supremacist families gather around to watch Tucker twice, the fact is, millions of viewers a night watch him once, and once is already more than enough.”

Watch the full segment above.