Below Deck Mediterranean star Jessica More has sounded off on Below Deck charter guest Charley Walters claims producers told him to act over the top and demanding to the crew.

Charley and friends kicked off Season 8 of Below Deck, and their appearance has fans expressing dislike for the group.

After the social media backlash, Charley revealed that producers told him to behave that way because it makes a good show.

There has been a lot of response to Charley’s accusations, including Captain Lee Rosbach and chef Rachel Hargrove. They have different opinions on the hot topic.

What did Jess say about Charley and his claims?

The Below Deck Med alum is no stranger to speaking her mind. Fans watched Jess openly share her opinion throughout Season 5 of the Bravo show.

“I don’t agree with this. Shows don’t need to be about tacky, rude drama. So many folks actually want to see heartfelt good drama that is being deprived on our TVs…” Jess wrote in the comments section of the post. 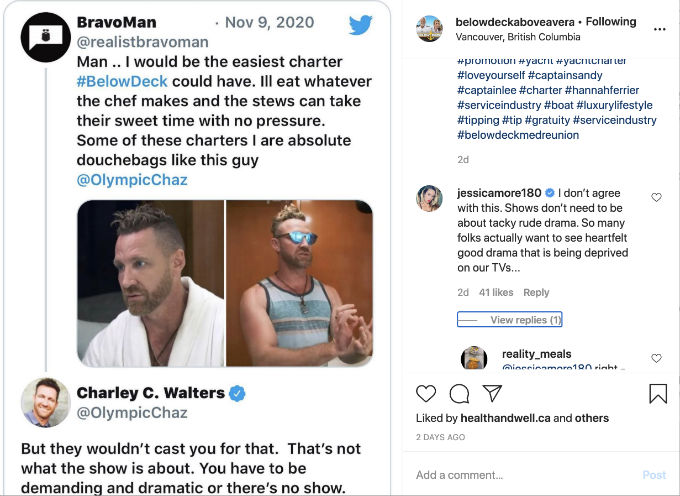 It didn’t take long for fans to respond to Jessica’s reply. While many agreed with the Bravo personality, several called her out since she was full of rude drama on her season.

Below Deck Season 6 third stew Caroline Bedol also got in on the action. She blasted Charley for his actions, and understanding of what behavior is considered demanding.

The hit Bravo yachting franchise has been under fire for months thanks to crazy drama that played out on Season 5 of Below Deck Mediterranean.

Fans continue to insist the show is scripted. Although producers have denied even speaking to crew members during filming, viewers are not convinced.

Now, as Charley declares producers want him to behave a certain way, viewers are once again getting frustrated with the Bravo show.

The one person fans do listen to is Captain Lee. He live Tweets during each episode and does his best to speak the truth in a classy way.

Below Deck Season 8 has only just begun, but fans already have strong opinions, especially when it comes to charter guest Charley Walters.

Former cast members, like Jessica More from Below Deck Med, are also getting involved in the social media buzz. It looks like viewers are in for one roller coaster ride of a season with lots of opinions.

Below Deck airs Mondays at 9/8c on Bravo.