‘I’ve got no bra on!’ This Morning’s Rochelle Humes caught in awkward exercise blunder

During Tuesday’s instalment of the ITV show, Rochelle and her This Morning guest presenter Andi Peters join in with an exercise segment with Peloton instructor Ben Alldis. However, when Rochelle started to jump around she quickly realised she wasn’t wearing a bra.

Before the presenting duo got into the exercises, Andi told his co-host he was taking the segment far too seriously as he got changed into some athleisure wear beforehand.

Rochelle, still dressed in a shoulderless top and white flared jeans, admitted she was too busy watching the VT of Doctor Scott to change her outfit.

Taking off her heels, Rochelle was told she would be doing five easy lower body exercises.

One of the moves they had to do was to get into a squat before jumping up and getting back into position. 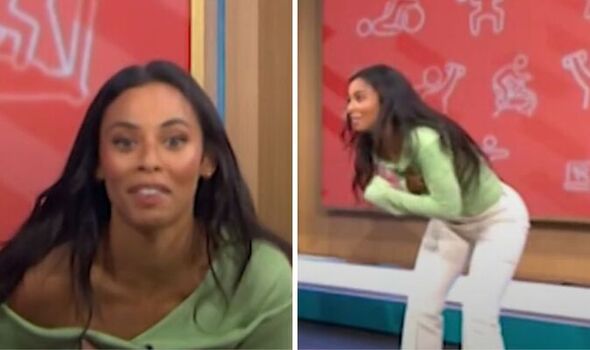 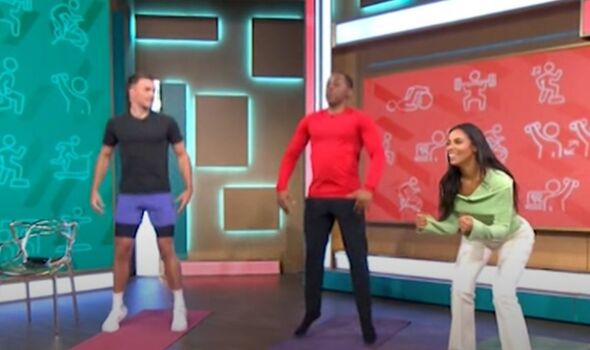 When they both started to jump, Andi encouraged the former Saturdays star by commenting: “Go on Roch.”

Although after a couple of jumps, Rochelle stopped as she clung to her chest explaining: “I’ve got no bra on!”

While Ben laughed, Andi joked: “That’s a revelation we weren’t quite prepared for.” 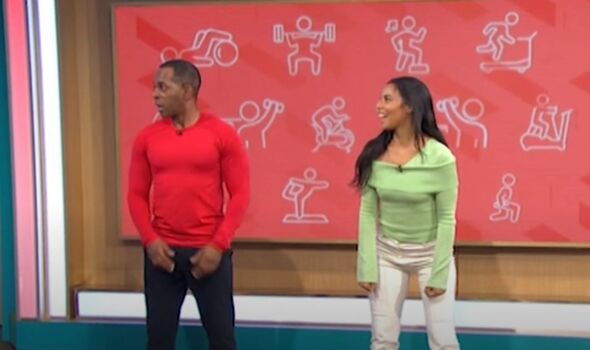 The 33-year-old continued with Ben’s workout but had to hold her top up as a result.

For the last move, Rochelle and Andi made the whole crew on set get involved which saw some members squat up and down while holding the camera.

Commenting on the team all working out, Andi shouted: “Come on, that’s what I like to see everyone!”

At the end of the segment, the former CBBC host showed he had worked up a sweat to Rochelle but she joked that he was simply “glowing”.

Elsewhere in the show, the duo were left in fits of giggles after speaking to Patrick the Pony’s owner Kirk Petrakis live from Devon.

The miniature pony is a therapy animal and due to his positive impact on the community has earned the title of mayor of Cockington.

After Kirk spoke about Patrick’s fame, he asked Rochelle and Andi if there was time to sing a song.

Caught off guard, Andi burst out laughing before Rochelle asked: “Well what song would you like to sing Kirk?”

Bursting into a song about Patrick, the This Morning hosts could be hard giggling off camera.

Applauding him once the song had finished, Rochelle said it was “lovely” while both presenters were struggling to keep a straight face.

Thanking him for appearing on the show, they continued to laugh as Andi commented: “No one mentioned the song!”