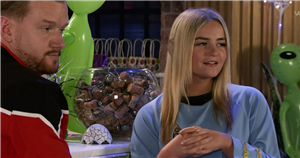 Fans of Coronation Street seem to think romance might soon be on the cards for Kelly Neelan and Gary Windass.

Gary and his partner Maria Connor have been looking after Kelly for several weeks following her homelessness and the death of her mother in April.

But during the latest episode of the ITV soap, Kelly and Gary shared a heart to heart during their first family Star Trek inspired party.

As the pair conversed, some viewers began to speculate that their could be a potential love interest between the pair.

Jumping onto Twitter, one Coronation Street fan said: "Can't surely be long before Gary and Kelly get it together?"

Another joked: "Any chance scriptwriters would get Kelly and Gary Windass 'together'. Nah, what was I thinking? That’s way too out there for them."

While a third simply penned: "Kelly and Gary scene," followed by emojis with love struck eyes.

Despite Kelly and Gary having a great connection, Kelly is completely unaware that Gary caused her father's death.

When Kelly's father Rick Neelan abducted and kidnapped Gary over his unpaid debts, Gary left a voicemail on his ex-partner Sarah Barlow's phone confessing his guilt and what he had got himself into.

However Gary later decided to delete the message after he was able to escape danger.

Not long after his close call, loan shark Rick made another attempt on Gary's life and the ex- army solider was forced to strike a fatal blow, before burying Rick's body in the woods.

Long after, following his marriage with Maria, Gary was forced to tell her the truth about Rick when she walked in during one of his many confrontations with Sarah.

Once hearing his confession, Maria quickly dumped him but they later rekindled their romance when she learnt to accept the circumstance surrounding his death.

But due to the fact that both Gary and Maria know about Rick's unlawful death fans have been left questioning when Kelly will find out.