In Case You Were Wondering, William Shatner Knows Exactly What 'Star Trek' Slash Fiction Is 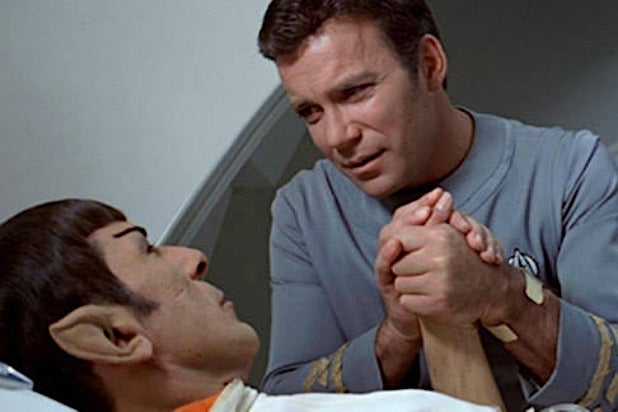 For those who don’t know, “slash fiction”  is a form of fan fiction, created during the early 1970s among the always groundbreaking “Star Trek” fandom, that depicts same sex sexual encounters between characters (or sometimes real people) who are (usually) not actually paired up in the original work. Now recognized as an important part of queer culture, the name comes from the fact that such stories were classified according the characters involved. Like, for instance, Kirk and Spock, known as “K/S” or by the fan-created portmanteau “Spirk.”

Speaking of “Spirk,” today William Shatner shared an image of a user on Twitter who attempted to provoke him into blocking her by posting a drawing of Captain Kirk making out with a Ferengi (a “Star Trek” alien culture introduced on “Star Trek: The Next Generation.”) In response, one of his followers said “I hope you don’t block spirk fans…they have a right as long as they don’t go overboard and bomb you with the stuff.”

To that, Shatner said “I’m why would I block Spirk fans? The immature types that are looking for attention are bored and looking for drama.” This prompted another follower to admit he had no idea what Shatner was talking about. And that’s when the captain dropped the knowledge.

“After the original series, alt fan stories called slash were created in which the characters of Kirk and Spock were lovers,” Shatner said. “It was called Spirk (SPock/kIRK) because the other combination was rude. When we heard about it; it was funny. Gene released a statement,” he said, referring to “Star Trek” creator Gene Roddenberry. Shatner added that he and Leonard Nimoy weren’t offended, they just found it hilarious.

Shatner isn’t wrong, Roddenberry actually did address the matter in a statement of sorts that was inserted into the novelization of “Star Trek: The Motion Picture” (1979), a truly weird (and fun) story that presents the film’s events as a historical nonfiction work commissioned by the United Federation of Planets. As part of that conceit, it’s littered with footnotes that explain glossary terms, give more background on certain concepts and characters, and even reiterate that the crew of the USS Enterprise were consulted.

One of these footnotes actually includes a statement on the subject of Kirk/Spock attributed to Admiral Kirk, and for your amusement we’ll just quote the whole thing below. (The context is an ambiguous Vulcan word Spock uses in the story to describe Kirk):

“Editor’s note: The human concept of friend is most nearly duplicated is most nearly duplicated in Vulcan thought by the term t’hy’la, which can also mean brother and lover. Spock’s recollection (from which this chapter is drawn) is that it was a most difficult moment for him since he did indeed consider Kirk to have become his brother. However, because t’hy’la can be used to mean lover, and since Kirk and Spock’s friendship was unusually close, this has led to some speculation over whether they had actually become lovers. At our request Admiral Kirk supplied the following comment on the subject:

“‘I was never aware of this ‘lovers’ rumor, although I have been told that Spock encountered it several times. Apparently, he had always dismissed it with his characteristic lifting of his right eyebrow, which usually connoted some combination of surprise, disbelief, and/or annoyance. As for myself, although I have no moral or other objections to physical love in any of its many earthly, alien, and mixed forms, I have always found my best gratification in that creature called woman. Also, I would not like to be thought of as being so foolish that I would select a love partner who came into sexual heat only once every seven years.”

See Shatner’s tweets below. And of course, live long and prosper.