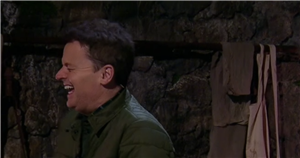 I'm a Celebrity… Get Me Out Of Here! hosts Ant McPartlin and Declan Donnelly couldn't withhold their giggles as TV presenter Richard Madeley stepped up to take on the latest Bushtucker Trial.

During the challenge, the 65-year-old TV veteran had struggled to undo a knot that was attached to a golden meal ticket star.

Having difficulty with the rope he groaned and grumbled before shouting out it's "wet and tight".

Unable to fight back the giggles, Ant turned to his co-star Dec to repeat the two words as the pair laughed away. Richard could be heard saying: "Its so cold, it makes it really really hard to feel anything.

The former This Morning host explained: "I know how to untie a knot but unfortunately this one is just not budging."

Before adding: "It's as tight as a pea in a drum this one is." Ant asked: "Penis what? What did he say?"

Unable to speak because he had been laughing Dec sniggered: "Was it a penis drum?

The Good Morning Britain host moaned: "Who tied these knots. I mean I found the star. I just can't undo it." Meanwhile earlier this week, Richard hit the headlines after his potty mouth was exposed during a head-to-head Bushtucker Trial against Loose Women panelist Frankie Bridge.

They both took part on the dreaded Turrets of Terror, that saw both campmates battle it out to reach the top of the castle to grab the key.

As the pressure began to mount, it was Richard who left fans in shock as he began to repeatedly swear.

Later on when back at camp he told his fellow celebrities if they get up for a "p***" in the night then they should add a log to the fire.

His potty mouth didn't go unnoticed by fan on Twitter with one person commenting: "Richard saying p*** and s*** has me giggling like a child. I was not ready for this!"

Another adding: "Hearing Richard Madeley swear is so strange to me #ImACeleb.

I'm A Celebrity airs nightly on ITV at 9pm