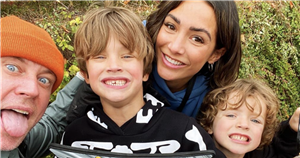 Frankie Bridge's husband Wayne has shared his support to his other half after she came in third on ITV's hit show I'm A Celebrity… Get Me Out Of Here!

The 33 year old former The Saturdays singer has been through the works on the competition programme as she's endured everything from drinking blended frog's legs, blended fish eyes and blended pig’s anus to being entrapped in a chamber filled with 50 snakes for 10 minutes.

Despite finding it "tough" at times, Frankie managed to make it to the final alongside Danny Miller, 30, and Simon Gregson, 47.

However, the star was sadly voted off during the last episode on Sunday 12 December, with Frankie coming in third overall – and beating her husband Wayne, who came in fifth on his season.

Now, Frankie's former professional footballer husband Wayne, 41, has shared his support towards her, gushing over the "special" person she is.

Taking to his Instagram stories, he shared a clip of Frankie lying in a chamber of snakes before telling his 279,000 followers: "@frankiebridge you are on special women me and the boys are so proud of you".

He added: "Thank you to everyone who voted and all the lovely messages".

Sitting down with host Ant McPartlin and Declan Donnelly, both 46, after being voted off, Frankie admitted she and Wayne will have a long, happy marriage as she's beaten him on the show.

"Now, your husband Wayne Bridge did the show in 2016 and you said you wanted to beat him. He came in fifth, you came third, you've done it!" Dec said.

"Woo! I've done it! We can have a long and happy marriage now," Frankie replied.

She then opened up on why she decided to take part in the show to begin with as she explained: "I really like to push myself and do things that take me outside my comfort zone.

"Being quite a naturally anxious person, I wanted to prove myself wrong on things I'm really scared of."

Later, when asked who she thought would win the show, she replied: "Even when we started the show I thought Danny would be the King of the Castle and I think he deserves it. He's obsessed with the show, as you know.

"He was in from the beginning, he was in The Clink. But it's hard, I love them both. But I do think Danny."

Stay up to date with all the latest on I'm A Celebrity… Get Me Out Of Here! by signing up to OK!'s daily celebrity newsletter.