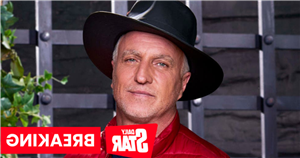 ITV has confirmed that footie legend David Ginola has become the eighth campmate to leave I'm A Celebrity… Get Me Out of Here! in its penultimate episode.

David received the least votes on Saturday's show and was axed from the programme.

But the footie star wasn't quite ready to let go of his camp feuds, as he labelled Louise Minchin "bossy" in his exit interview – and referenced his argument with Naughty Boy.

And David wasn't making any apologies for what he'd said – though he admitted his castle experience had been "fun".

Stunned fans couldn't believe what they were seeing, as one posted: "Damn, surprised David has left."

"Gutted David has gone!" someone else wailed.

As a third fan wrote: "I'm actually quite upset that David didn't get to the final three! Absolutely gutted for him!"

It'll be a blow for the remaining three campmates, as the camp has been growing closer by the day – and tonight, decided to enhance their bond by turning to a musical interlude.

Olympic diver Matty Lee got into the festive mood, singing Winter Wonderland and changing the words to ‘Wales Wonderland’.

Frankie joined in, while Simon and Danny started harmonising.

Former Saturdays singer Frankie said in the Telegraph: "There’s been so much singing in camp recently. I feel like we’re trying to fill the silence."

Corrie legend Simon admitted: "It was like a really, really crap musical."

The group chose new names as they donned their Cyclone outfits.

Simon said: "My name is Sir Fart-A-Lot and I intend to use my superior bottom to blast me to victory!"

Danny said: "My name is Lord Cry-A-Lot and I intend to use my superpowers to take on Cyclone, because water is my best friend."

Frankie said: "Bow down Sirs and Lords, Lady Drawbridge is here. Despite my name, I never draw, I always win."

Meanwhile, David told camp: "I am the Lord of Merci and you can tremble in front of me… you’re going to regret if you’re standing there next to me. But anyway… lord of merci beaucoup!"

He added: "Merci is an analogy to the merci thank you very much and mercy in English – you all know what it means."

When they arrived for the trial, Ant said: "You all look amazing. Even you Simon."

Dec then congratulated them on being in the final four.