How I Met Your Father EPs on HIMYM Character's Tie to [Spoiler] in Finale: 'This Was Pretty Much Always the Plan'

Tuesday’s How I Met Your Father finale posited (and then proved) that timing is everything.

Had Becky not discovered The Captain’s affair and decided to divorce him, she wouldn’t have seized and sunken his prized boats — including the vessel in Australia that employed marine biologist Ian, Sophie’s Tinder date from Episode 1. Suddenly, Ian was out of a job and back in New York, just in time to reunite with Soph at the Naomi Reisberg exhibition. 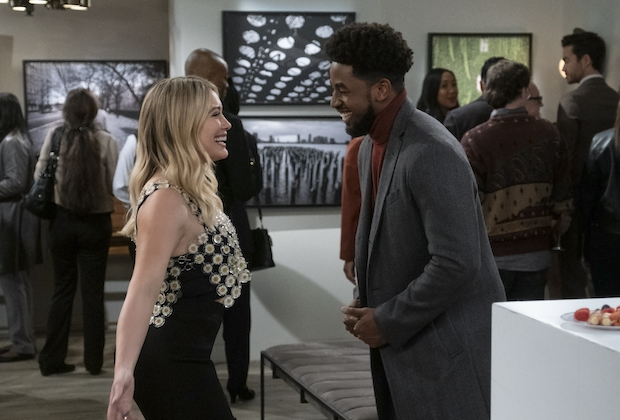 Of course, a Sophie/Ian romance wouldn’t be in the cards had Sophie not torpedoed things with Jesse. When Jesse suggested he was “all in” on their relationship — not only did he stand by the accidental “I love you” he blurted out in his sleep (#TedVibes), he also gave up a gig touring with ex-girlfriend Meredith — Sophie suggested it was too much, too soon. A subsequent conversation with famed news reporter Robin Scherbatsky (more on that return here) helped Sophie see that she overreacted out of fear, but when she returned from MacLaren’s to confront Jesse, she was too late. He’d already reunited with Mer.

Below, series creators Isaac Aptaker and Elizabeth Berger discuss the big twist linking Ian to The Captain, explain why Sophie and Jesse aren’t ready to be in a relationship (yet), and tease what’s to come following Charlie and Val’s breakup, Sid and Hannah’s spur-of-the-moment wedding and Ellen’s sudden burst of luck — all as the How I Met Your Mother sequel heads into Season 2. 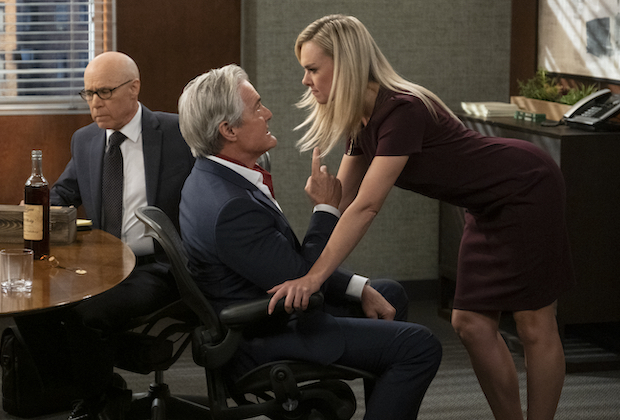 APTAKER | Yeah, you made the wrong marine biologist link. [Laughs]

TVLINE | Was George von Smoot — or rather, The Captain — always poised to be a piece of the HIMYF puzzle?
APTAKER | Yeah, this was pretty much always the plan. And like we said, we really lucked out because we had this contingency plan [in case we weren’t able to get Kyle MacLachlan back from Australia] that wouldn’t have been as fun or as cool, where we were going to introduce this new, wealthy New York philanthropist. But the fact that it’s The Captain, and he’s nautical, that was always the intention. We’re so glad it came together.

TVLINE | Just when it seemed like Sophie and Jesse were going to give romance a shot, you went and torpedoed their almost-relationship. Why?
APTAKER | They still have a lot of work to do on themselves. When they met each other, they were in really complicated places — and even though this is 9-10 episodes down the line, Jesse is still really raw over what happened with Meredith. He’s so rattled by her resurfacing, and now she’s written a song, if not an entire album about their relationship, so he’s still in a really complicated place. And then we’re seeing with Sophie that she is still someone who is quite rattled and unsure of herself in a relationship, so perhaps they’re not quite ready to have a go of it. 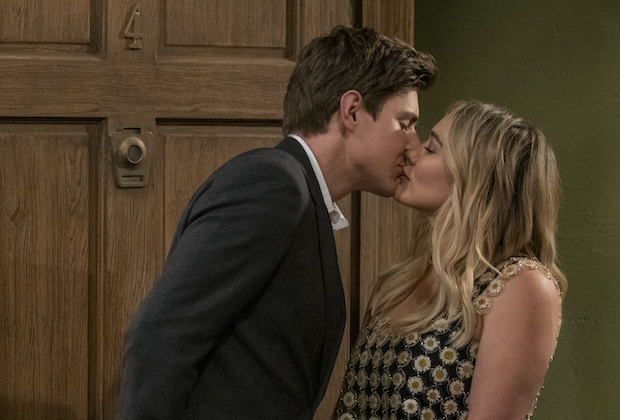 BERGER | One of the things as we were talking about this finale that came up in the writers’ room was this idea of self sabotage, and this idea of getting in your own way — this notion where you can be searching, searching, searching for your person, and then they present themselves to you, they give you everything that you thought that you wanted, and you totally freak out. This was something that a bunch of people in the room had experienced, and we thought would be really interesting to play with Sophie, which is not to say that Jesse is necessarily her person, but it was definitely who she thought it should be towards the end of this season, and by the time she realized she blew it up it was too late.

TVLINE | Sophie and Ian seemed like an ideal match in the pilot, but neither Sophie nor the audience knows Ian too well. Is that part of the appeal of bringing him back now?
BERGER | I think you kind of hit it. Obviously, Sophie and Ian have only experienced the fantasy version of each other; they experienced the fun, flirty, light bantery version that exists within each other’s phones, and it’s very different when somebody actually is in front of you in real life and you’re facing day-to-day decisions and problems. We’re very excited to explore what that’s like when the two of them are together “IRL,” as the kids say. 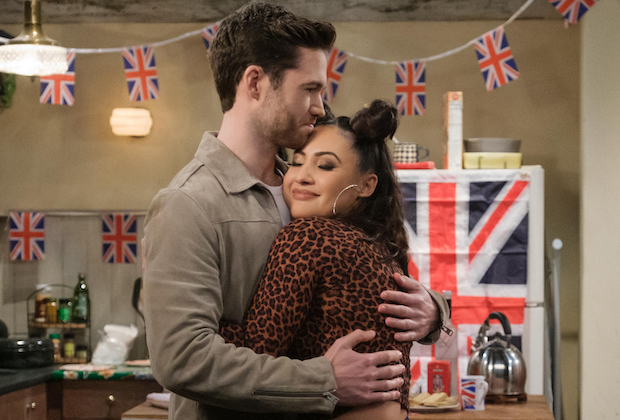 TVLINE | Charlie and Val break up after Charlie tells Val that he never wants children. Should we read into this at all, in terms of Charlie’s candidacy as one of the potential fathers?
APTAKER | No, definitely not. A lot of people don’t want kids when they’re a certain age, then change their minds. A lot of people don’t want kids, then accidentally have kids. There’s lots of different paths people take to parenthood, and just because at one moment in time, you’re saying you don’t want them doesn’t mean that they’re not in the cards.

TVLINE | I thought we were in for a rehash of Marshall and Lily’s fight at the end of HIMYM Season 1, which culminated in Lily leaving for San Francisco. Instead, Sid and Hannah hit pause and… head to City Hall to get hitched. The bicoastal bride and groom are doomed, right? 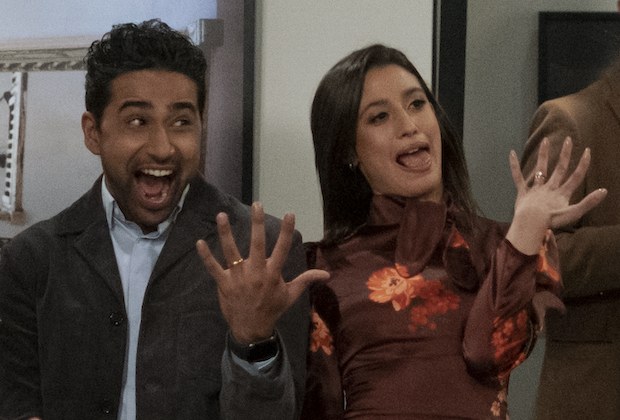 APTAKER | In the writers’ room, we all know so many couples like this, where they both want these really big lives and they also want to be together, but nobody is willing to make any big sacrifice, or make a compromise. It’s a question of how long can that sustain itself? We think the characters are so great together, but at the same time, they’re so entrenched in their cities and their careers. At a certain point, does that break? That’s what we’re going to be exploring in Season 2.
BERGER | There’s always the hope with a couple that making a big move can save the relationship — you get married or you have a kid. But sometimes that just means sweeping everything under the rug and not actually dealing with what’s going to be really tricky. Towards the end of Season 1, they’ve swept some of their issues under the rug and are trying not to think about them. We’ll see how those boil up and explode as we move into Season 2.

TVLINE | Sid and Hannah’s “good news” is debatable, but Ellen’s good news is actually good: a new job as Goliath’s assistant produce officer, and a second chance with next-door neighbor Rachel. Was it time to give Ellen a win — or, in this case, a double win? 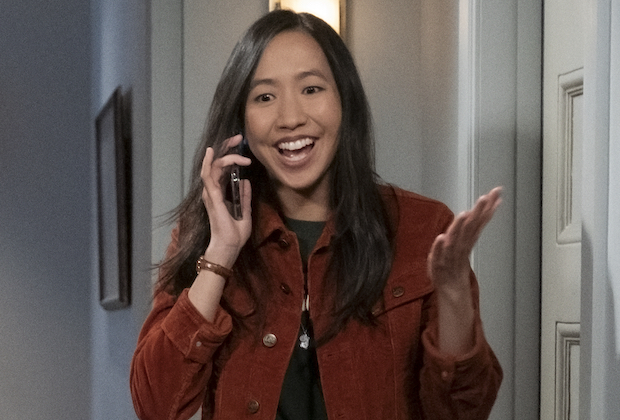 APTAKER | She got really beat up over the course of the season. [Laughs] I mean, we’ve seen her strike out so many times, it just felt like Ellen was deserved a cosmic win. We’re really excited to see that character try embarking on a new relationship for the first time since her divorce, and have a go of it in this very different career space where she is going from running this sweet, small-town lettuce farm to this big corporation. We think it’s going to be a really fun fish-out-of-water story.

What did you think of the How I Met Your Father finale? Did you suspect Ian’s tie to The Captain, or were you blindsided by the reveal? Grade the episode (and Season 1 as a whole), then drop a comment with your full review.