Horror for the Platts as the killer sinkhole in Corrie opens up again? 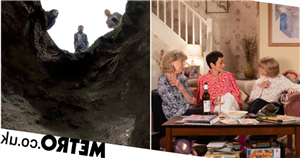 Who could forget the deadly sinkhole that suddenly opened up in the Platts’ garden in Coronation Street last year?

The killer crater was created by dodgy Ray Crosby (Mark Frost) in an effort to get David Platt (Jack P. Shepherd) to sell the house cheaply so he could build a new hotel on the land.

Numerous attempts to fix the hole were only partly successful, and then a huge storm opened it up again. Johnny Connor (Richard Hawley) and Jenny Bradley (Sally Ann Matthews) became trapped underground and Johnny was ultimately swept away to his death.

So it’s obviously a huge concern in upcoming episodes when David notices signs that the terrifying cavity may be opening up again. The Platts make plans to move out for safety reasons while Leo (Joe Frost) conducts a full survey. Audrey (Sue Nicholls) suggests they can all come to stay with her at Grasmere Drive.

Why does Stephen (Todd Boyce) seem uncomfortable with that idea? Leo spots that there’s something shifty about Stephen and tells Jenny – who of course has reasons of her own to feel shifty when Stephen’s name is mentioned, after sharing a kiss with him recently.

But could Leo have spotted something more sinister about Stephen? Corrie boss Iain MacLeod has said that Stephen is going to be revealed as, ‘dark, dangerous, interesting, scheming.’

Should the Platts be more scared of Stephen than of the sinkhole?