Home and Away has teased a horror accident for Raffy Morrison and a shock arrival for Dean in two brand new trailers.

Raffy’s life will be left hanging in the balance after she joins her friends Coco and Ryder on a camping trip that ends in disaster.

When Ryder leads the trio to the River Boys ‘Hideout’ house, they soon find a secret underground hideout – which has an escape route tunnel to the garden.

Determined to make the most of the opportunity, the teens decide to exit the house via the tunnel, but tragedy strikes when it ends up collapsing on top of them. 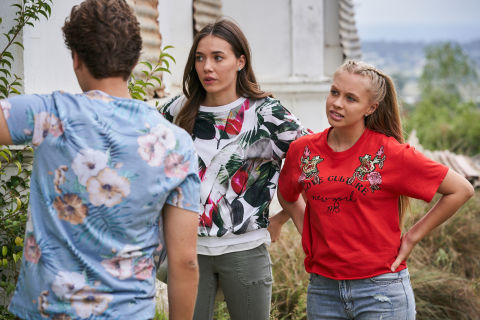 The new promo confirms that Raffy (Olivia Deeble) is the most injured after the accident – but can they get her to safety before it’s too late?

Meanwhile, a second trailer teases a turbulent time ahead for Dean Thompson (Patrick O’Connor) after his wayward mum Karen arrives in Summer Bay.

Show bosses are delving deeper into Dean’s backstory as his life continues to spiral out of control, paving the way for Karen to turn up in upcoming scenes. But could her arrival actually end up bringing about more problems for the River Boy?