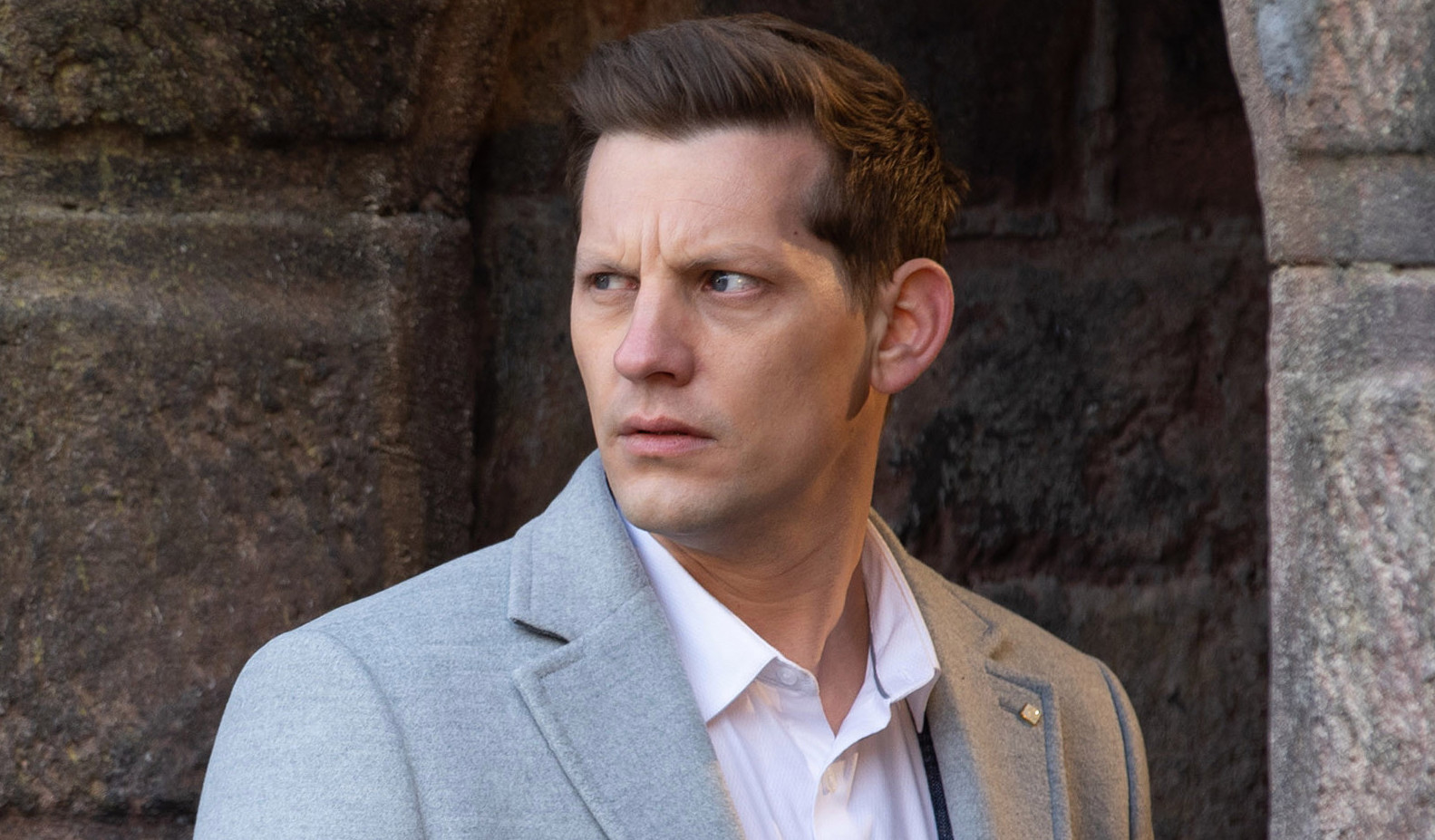 John Paul McQueen (James Sutton) is struggling to move on in the wake of the death of abusive partner George Kiss (Callum Kerr), and next week, the Hollyoaks legend becomes violent.

Continuing to seek solace in the booze, the school teacher is in no mood for Ste Hay (Kieron Richardson), who confronts him with wild accusations about his relationship with James Nightingale (Gregory Finnegan).

Ste, having witnessed an exchange between boyfriend John Paul and ex James, comes to believe that the pair had sex behind his back.

Viewers will know that, in spite of John Paul and James sharing a moment on the night in question, they did not actually sleep together. Ste, however, doesn’t actually know that, and therefore he’s on a mission to find out the truth.

Wasting little time, he sets off to find John Paul, who is drunk at The Dog.

‘Ste doesn’t speak to him particularly well, but it doesn’t warrant being punched or screamed at, which is what happens,’ actor James Sutton told Metro.co.uk, teasing the upcoming scenes.

‘James is there as well, and he witnesses John Paul’s behaviour. John Paul is embarrassed and ashamed, as well as having to deal with the truth that he’s not the upstanding member of the community that he thought he was.

‘He’s not coping very well. This is the start of a long storyline, about how John Paul is coping, or not coping. He’s struggling to pick up the pieces of his life.’

‘He’s drinking and lashing out, and almost becoming the guy that George said that he was: that he does have a nasty side. And that’s kind of coming out. Now that he’s dealt with the heartache of losing his partner, it’s about figuring out where he fits in society again.

‘It’s like the pattern of violence in their relationship is still apparent in his everyday life. He doesn’t see there is anything wrong. He can’t see that he’s changed, it’s only other people that can see it, and notice it, and question. It’s a difficult time.’

Sally St Claire (Annie Wallace), horrified by what’s transpired, offers John Paul some advice, but it appears as though she fails to get through to him as well.

‘Sally tries to be very sympathetic,’ said James. ‘She’s kind and caring, and a parental figure. But John Paul doesn’t really listen to that. He speaks to her badly as well. It’s like a phase, this pattern of seeing everyone else is wrong and that everyone is out to get him, basically.’

But what does the future hold for John Paul?

‘It’s a long road to recovery,’ added James. ‘Not only getting used to life without George, but also to re-establish himself as this good, moral figurehead of the family. It’s going to be a long path ahead.

‘People suggest therapy to him on a couple of occasions, and he doesn’t take too well to that either. It’s only when he hits rock bottom that he will start to pick up the pieces.’

James and Ste, meanwhile, are seemingly happy in their relationship. But is it all over for Jamess and John Paul? Or could there be more to come for the former lovers?

‘I think those two characters have a rich history,’ he added, ‘as is the case with Ste as well. There is more to come. There is much more to come for these characters, and their relationship and how that all works.

‘And also between Ste and James as well, they’re trying to hold down a normal, stable relationship. There is lot of fun to be had, and a lot of drama to seep out of their relationship over the coming months. ‘