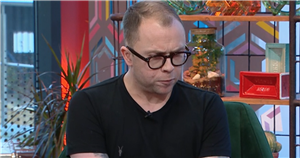 The actor, who played Dennis Savage on the Channel 4 soap, appeared on Wednesday's show (September 28) where he opened up about his struggles living with Borderline Personality Disorder.

Sharing their emotional response, fans praised the "insightful" interview while also admitting to being left "in tears".

One fan wrote: "I'm in tears watching your interview with @joetracini.

"I have the same thoughts, day in, day out. It's a daily struggle and not the best way to live each day."

Another said: "Awww… Joe Tracini. What a lovely guy."

Meanwhile, a third viewer commented: "Wow Joe is so honest, what an amazing guy to speak so openly."

A fourth said: "What a brilliant, insightful interview. Will definitely be reading the book."

"My heart goes out to you Joe. Keep on keeping on and well done for going on TV and speaking about it so well," another fan concluded.

During his discussion with Steph, Joe admitted to feeling "sick of his life" and "feeling dissociated" from family and friends.

He said: "I feel disassociated from life anyway so I don't feel particularly attached to my life or the people and the things around me and the reason I cope with it by being rational and why I've been able to put the things in a book is because I feel like I'm watching my own life and I'm sick of it.

"I am sick of my life but it is the only one I'm ever going to get."

He later added: "I don't want to die but my brain has death as an option."

Joe, who is also the son of comedian and I'm a Celeb star Joe Pasquale, recently released a book about his mental health struggles titled Ten Things I Hate About Me.