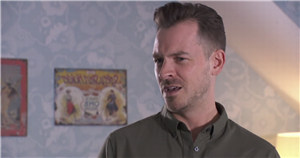 Nancy encouraged Darren to be by Mandy’s side for her daughter Ella’s (Erin Palmer) court hearing during the latest first-look episode on E4.

Darren was once again left feeling rejected by his ex-wife Nancy, which pushed him back into the arms of new wife Mandy.

Mandy and Darren were due to get married earlier this year but their wedding ended in shocking scenes as little Ella was arrested on suspicion of murdering of Jordan Price.

Darren was left devastated when he discovered a letter from Ella to his son Charlie (Charlie Behan), who was in prison for Jordan's murder, confessing her guilt over Jordan's death.

The chef has grown closer to Nancy in recent weeks following his separation from Mandy, and it’s clear that he thinks Nancy is the woman he’s destined to be with.

However, he ended in sleeping with Mandy during the recent visit to Hollyoaks village and he was left feeling conflicted once again.

Viewers were left angry with Darren and rushed to their keyboards to air their frustration at his decision.

Taking to Twitter, one fan penned: "Oh Darren what you doing? You should be with Nancy she's your soulmate."

Another added: "Whoever wrote Darren sleeping with Mandy again into the script has no soul."

A third person moaned: "No! Darren & Nancy belong together!"

Hollyoaks spoilers have revealed that things are about to get even worse for Darren as he's left fighting for his life in upcoming scenes.

He gets injured during the re-opening of The Loft when the nightclub sign falls on top of him.

Darren attempts to work out whether he wants to be with Nancy or Mandy and before long, he makes his choice.

He instructs Mandy to meet him at The Loft but before he can speak the sign comes crashing down and he’s left fighting for his life as a result.

Mandy later confronts Nancy and demands to know what exactly went on between she and Darren prior to the accident.

Will the truth come out and will Darren survive?

Hollyoaks airs weekdays on Channel 4 at 6.30pm followed by first-look episodes on E4 at 7pm