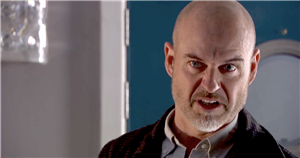 Hollyoaks fans were left on the edge of their seat as Fergus Collins and Warren Fox found themselves in grave danger during the latest visit to the village.

Both lives were left hanging in the balance during Monday's first-look episode when the perverted Operation Bluebird storyline reached a deadly climax.

Maxine Minniver managed to get her mum Trish Minniver and Warren's son Joel Dexter on board to bring Fergus down after realising the dodgy businessman had tried to sell her for £1million.

However, Fergus was moving forward with a deadly plan of his own to silence Warren by ordering one of his dodgy contacts in the prison to have the fan favourite killed.

Joel made a secret visit to Warren in prison to encourage him to call his love interest Maxine on his burner phone.

The pair made their peace and Warren tried to warn Maxine off the dangerous plot to expose Fergus.

Trish agreed to try to get a taped confession from Fergus, but the plan fell apart when the dancer teacher buckled.

She ended up revealing too much under the pressure and things took a dramatic turn.

Fergus turned on girlfriend Trish and threatened to kill her because she now knew too much about Bluebird.

Just as he was about to hurt her, Maxine stormed in to crack Fergus over the head with a bottle.

Fans of the Channel 4 soap rushed to their keyboards to praise Maxine for finally standing up to the evil man.

Another added: "OMG what has Maxine done to Fergus! Absolutely love it?"

A third person posted: "OMG I was at the end of my seat with tonight's #hollyoaks."

While a fourth social media user said: "I’m glad Maxine did that tbh fergus is disgusting."

As Fergus collapsed to the floor, Warren was surrounded by three prisoners in the yard over in the prison.

The hardman managed to fight them off before Fergus's bent prison guard called them off.

The guard then brought in a much bigger prisoner to have a go going up against Warren.

Fans were later shown a glimpse of Warren unconscious on the ground before the credits rolled.

Will Fergus and Warren both die or will one survive?

Hollyoaks airs weekdays on Channel 4 at 6.30pm followed by first look episodes on E4 at 7pm