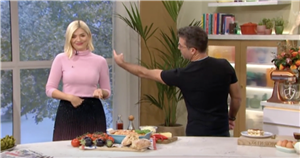 Holly Willoughby was left shocked by Gino D’Acampo after he demonstrated a rude geography lesson with her on This Morning.

The presenter was unexpectedly included as a map aid to the Italian chef as he pinpointed areas of Italy around her in front of co-host, Philip Scofield, on Tuesday morning.

Holly stood next to Gino while he conducted his impromptu geography lesson before beginning his scheduled spicy aubergine bake segment.

“In the Piedmont region here-“ he said pointing to Holly’s shoulder, “is where the Savoiardi biscuit comes from.”

“On the other side is Treviso,” Gino continued, moving his hand across her chest region to her other shoulder.

“I’m really concerned if he’s going to talk about Sicily here,” Philip commented jokily, causing both he and Holly to laugh.

Initially the This Morning presenters found the whole explanation from Gino bizarrely funny, however that soon changed when the TV chef’s ‘lesson’ took a quick inappropriate turn.

“No, Sicily is all the way down there!” Gino replied, pointing further down where Holly stood.

Holly laughed off his crude gestures as she stepped further aside from Gino while continued on with his mapping lecture.

“But if your belly button is Rome – I was born in Naples which is on your side,” he said placing his hand by his own side.

“But I went to school which is where the Vesuvius is, so it’s more inland-“ Gino added, moving his hand further towards his groin.

At this point, Holly returned to sit back next to Philip, smirking while at the same time unimpressed with the chef's geography lesson.

“So, I can technically say that I spent my youth training and playing around your vagina," he remarked.

“Oh my God!” Holly and Philip simultaneously responded, both mouth agape at Gino's salacious comments, while the crew's shock could also be heard in the studio.

“There’s nothing wrong with that!” Gino responded.

“It’s just a word that everybody knows and that’s what I’ve been doing geographically.”

This Morning viewers were not happy with this segment from the TV chef, taking to Twitter to complain about it afterwards.

“Why is Gino so disgusting he’s not funny! Get him off TV!” wrote one angry viewer.

“Gino is a total pig” It isn’t what he said it’s the fact that it was deemed ok to say it to Holly live on the TV,” another viewer commented.

“It’s not funny and it’s not clever.”