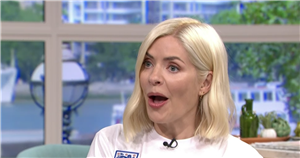 This Morning star Holly Willoughby was so eager to know if England will beat Denmark on Wednesday evening that she consulted with a psychic banana for insight.

In the segment, Holly waltzed off to grab the fruity item while explaining how slicing it open can reveal a "yes" or "no" answer if you ask it a question.

It is believed that the yellow skinned item can produce a "Y" as an indication for yes or a "dot" which represents no.

Holly, 40, was joined by co-star Philip Schofield, 59, Gyles Brandreth and Made In Chelsea star Georgia Toffolo -aka Toff as she chimed the question on everyone's lips.

"Will England win tonight? Oh I feel quite nervous," as she began to cut the tip off of the banana off to reveal the answer.

She held up the banana showcasing a Y for "yes".

In advance of chopping up the banana Holly warned that "would be harmed" in the process but "would not go to waste" as Gyles was on hand to eat it.

As the Gogglebox star began to chow down on the fruit he had further questions for the future predicting item.

Gyles hilariously joked: "Hes speaking to me now like as psychic, what's that the score will be two nil.

"And he's saying it is looking good for Sunday as well."

Philip appeared to be gobsmacked as Gyles began to speak to the banana and later couldn't contain his laugher.

Everyone seemed to be in high spirits ahead of Wednesday's semi Euro 2020 semifinals.

This evening England will go head to head with Denmark in hope of facing Italy in the final on Sunday.

Even Holly was feeling patriotic as she swapped her usual attire for a short sleeved England top to show her support.