It’s been nearly two years since the first season of The OA dropped, but given the fast TV turnover cycle these says, it’s basically the equivalent of a million years.

While we’ve only had the occasional updates here and there, star and co-creator Brit Marling has revealed why season 2 is taking so long.

The actress, who plays the lead role of Prairie Johnson, took to Instagram to reveal that they are in the sound mixing stage, and elaborated on the long process to bring it to the small screen.

“TV shows are created on a yearly cycle primarily because they function off a pattern narrative,” she wrote.

“The show creator acts as a master tailor – she crafts the pattern for the original garment (pilot). Then other great tailors come in and create new garments out of this same pattern.

“This allows for creation with great speed and also familiarity, which is one of the things we all love about great TV,” she added, noting that many shows were adaptations and so worked quicker with the source material in tow, while others “leap-frog their production cycle”. 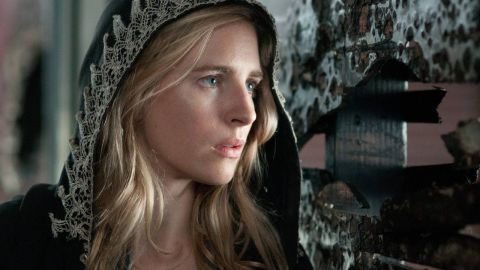 However, she explained that The OA “doesn’t function this way”, adding: “Our chapters vary in length, scope, and even genre. There is no pattern. As a result, at every step along the way nothing can be imitated, it has to be invented.”

Marling said that they threw out “pattern budgets” that map out financial costs of a season, as each chapter needed different budgets rather than one episode costing the same as the next.

The star added that they see The OA as “neither film nor TV” but a “new kind of storytelling”, and revealed that she couldn’t say when it will be released just yet.

The OA season 1 is streaming now on Netflix.