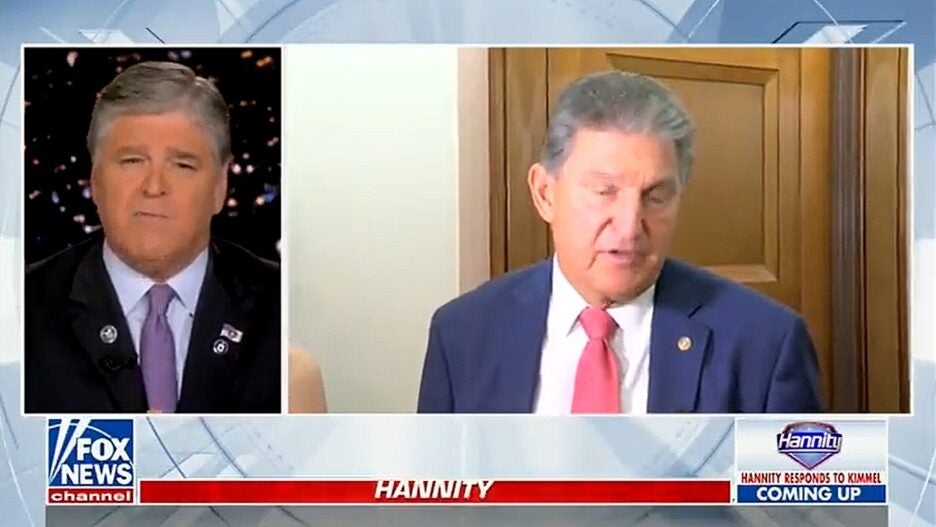 People often mislabel their apparent political opponents. It happens. But on Monday, Fox News’ Sean Hannity took that to the next level when he described one of the most famously right wing Democrats in modern history in terms that made him sound like an ally of Elizabeth Warren.

So of course you know that West Virginia Senator Joe Manchin and Arizona Senator Kyrsten Sinema have been thorns in side of the Democratic Party all year. Most recently seeming to go of their way to almost kill President Joe Biden’s ‘Build Back Better’ bill just last week.

Sinema and Manchine’s positions are generally considered to be among the most conservative in the Democratic Party, and they’re usually referred to as “moderates.” One thing no one considers either of them to be is “liberal.” But tell that to Hannity.

On Monday’s episode of his show, he got to talking about Biden’s “Build Back Better” bill, and during his rant — obviously he opposes the bill — he described Joe Manchin this way: “The liberal Democrat from West Virginia.”

No really, watch below:

Hannity’s description of the famously conservative Manchin as a liberal is of course very weird. Among other things, Manchin supports the Hyde Amendment (which restricts the funding of reproductive health services) and wants to preserve the filibuster. He even partied with Texas Republicans at a time Texas Democrats were trying to stop passage of draconian restrictions on voting rights in the state.

We assume it’s because Hannity is attempting to make the case that the Build Back Better bill is so awful that even a liberal is opposed to it. Of course, that only works if Hannity picked an actual liberal, instead of one he made up in his head. But c’est la vie.