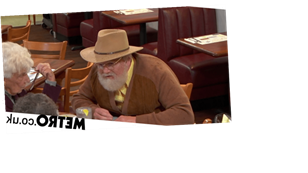 Gordon Ramsay fans lost it on social media after the celebrity chef threw a rotten apple at a disgruntled restaurant owner on 24 Hours to Hell and Back.

In typical 24 Hours to Hell and Back style, Gordon donned a ridiculous disguise to inspect the food, dressing up as an old man to avoid detection – his best outfit since seeing in 2021 as a grandma.

He was served week-old seafood, including crab cakes and a dodgy oyster bowl – safe to say he wasn’t impressed.

A hidden-camera video then revealed expired food, before a staff member admitted the restaurant had a salmonella outbreak.

Things got worse when Gordon revealed his true identity and took a look behind the scenes in the kitchen. Inside, Gordon discovered the staff never washed the equipment, with black mould growing on the walk-in.

The highlight for many though came when Gordon discovered a batch of rotten apples. When the owner gave an excuse Gordon wasn’t happy with, the chef threw the mushy apples straight at him.

The moment brought a big reaction from viewers, with many left in hysterics.

‘Wow Gordon Ramsay is really levelling up. He just launched a rotten apple at some poor prat in his own kitchen,’ another said.

Despite the apple incident, the restaurant were able to turn things around with Gordon’s help – thank goodness.

Gordon Ramsay’s 24 Hours to Hell and Back airs on Channel 4.