One thing is for certain, Minnie Beets is one we always want to have more airtime. Hopefully, the steel behind Tony Beets might get to be on camera more in Season 9 than she has been previously.

The clip for tomorrow night’s premiere is a preview that shows Tony salvaging pontoons in his bid to make the second dredge for pulling gold out of the ground. It also reveals how important it is to keep Minnie happy.

Fans are keyed up about this season 9 Gold Rush two-hour episode that hits Friday, Oct. 12.

There’s a pre-show Gold Rush: The Dirt with Christo Doyle hosting along with Matt Rogers and “Dozer Dave,” aka Dave Turin. Turin left the series after an on-camera brawl and another Todd Hoffman crew member in Colorado.

The clip we have teasing tomorrow’s show is set 60 miles south of Dawson City, where Tony starts transporting his second dredge. And as per usual, the Dutchman doesn’t mince words. 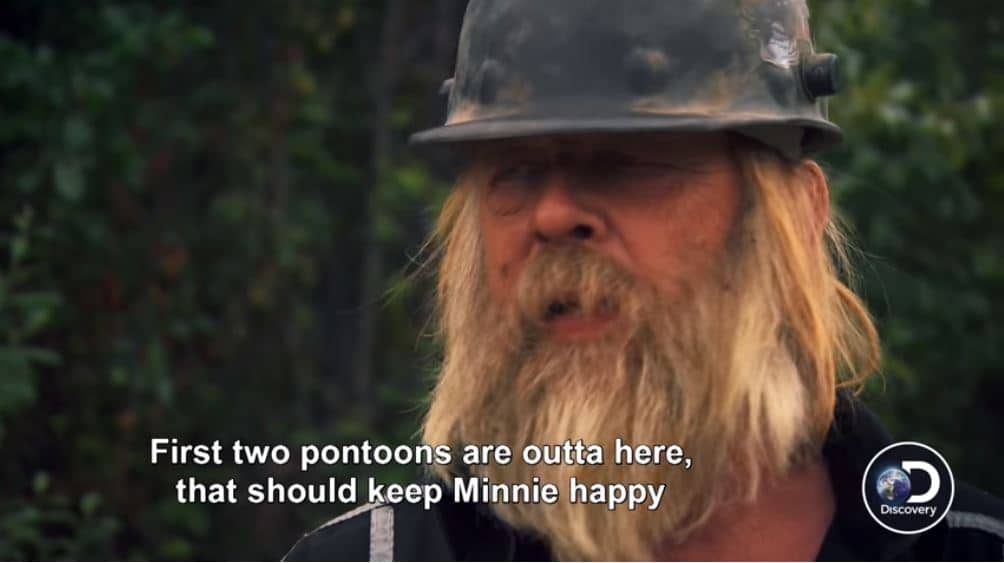 The narrator informs us that the 19 hollow steel pontoons are the vital first part Tony needs for the rebuild. To get them, he needs to remove the 9-ton winch pack. Minor denting and calamity ensue.

Then the winch dents the structure. Beets sees it all. “What the f**k?” Get outta here!

At the end of the day, mission accomplished as Beets surmised the action.

He says, “First two pontoons are outta here, that should keep Minnie happy. There’s a good, early start. But at this rate, we’re gonna get some gold with dredge number two this year yet!”