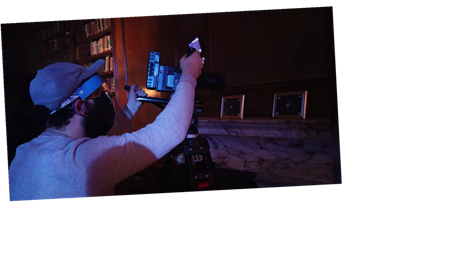 In January, hip-hop group Th1rt3n released the single “Cult 45” from its new album “A Magnificent Day for an Exorcism” to coincide with the Presidential Inauguration. The group, which features Pharaohe Monch along with Jack White drummer Daru Jones and guitarist Marcus Machado, tackles rampant political corruption and capitalist excesses in its latest album. Monch also directed the dramatic music video, which took place in the historic South Bronx location of the Andrew Freedman Home, where the grimy rooms provided an appropriate backdrop for the “verbal voodoo” aesthetic that Monch said he wanted to capture with the timely work.

The video was organized with the help of online course developer Yellowbrick, which operated a second unit that captured every stage of the production. The result includes extensive 360-degree stills and videos that provide a unique glimpse at the various aspects involved in producing a Covid-safe project in a single location. That material is part of the final module included in “Film and TV Industry Essentials,” a program that was created by Yellowbrick in collaboration with NYU’s Tisch School of the Arts, IndieWire, and Rolling Stone.

In Rolling Stone video below, David Grandison, Yellowbrick’s director of instructional design explains the process involved in capturing this extensive behind-the-scenes look, which allows students to learn about everything from location scouting to call sheets and post-production. The Yellowbrick team was able to scan each room for the shoot in advance, allowing the rest of the crew to utilize the 3D images to plot its the daylong production far in advance. “We’re giving you a fly-on-the-wall perspective of every single set as a part of this project,” Grandison said.

New pandemic protocols meant that the video, already the type of project shot with tight turnaround, couldn’t waste time. “You have to account for every hour of the day,” Grandison said. “You have to make sure you’re preparing for the next set. That process is going constantly.” The interactive learning experience in the latest module includes time-lapse shots created with VR cameras that capture the flow of the production in complex detail from multiple angles. The resulting 360 videos are accessible on mobile devices, so students can explore each detail up close.

The shoot included several intricate passages, including the musicians performing the work and a confrontation that takes place between Monch and a villainous billionaire character. For the latter sequence, Yellowbrick was able to capture the rehearsal process with the actor as well as the role of storyboards in blocking his movements. “We take you step by step through each part of this,” Grandison. “When you see it in the music video, it really comes together.”

Watch the full video below below and go here for more information on how to enroll in the course.