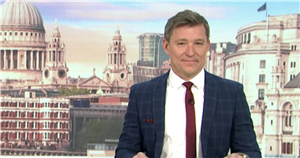 Good Morning Britain star Ben Shephard took a savage swipe at co-star Laura Tobin during the latest edition of the ITV breakfast show as she unveiled her "husky" voice.

The 47-year-old presenter was back on our screens on Thursday morning alongside Kate Garraway.

Meteorologist Laura was in the studio to provide the latest weather forecast but the weather presenter had a "husky" voice.

She explained to viewers that she is still recovering from her night out at the BRIT Awards on Tuesday evening.

Laura said: "It's from partying at the BRITs two nights ago."

Kate joined in adding: "I want to see some pictures."

Ben said: "Not of the weather?"

She replied: "No from the night out"

It's not the first time Laura's voice has been the topic of discussion on the ITV programme.

Back in 2017, Laura shocked fans with her very deep voice, with many joking she sounded like gravelly crooner Barry White.

The breakfast telly regular was suffering with a sore throat after a trip to Scotland.

Ben showed little sympathy, quipping after her first weather summary: "Was it Laura? I thought it was Barry White!"

Laura took to her Twitter page to snap a selfie and plead: "Stop laughing at me @CharlotteHawkns @benshephard and @kategarraway I'm ill!

"I've got honey and lemon and will hopefully be less Barry White later!"

Later on the show, Laura again took to her Twitter page to update fans.

She then joked she couldn't have pulled a sickie and said: "I couldn't call in sick, because I couldn't speak!

"I said I would be fine and I will muddle through."

It comes as Laura was left red-faced as she made an hilarious blunder live on air while presenting the weather recently.

She thought she'd gotten away with her slip-of-the-tongue, but was called out over it by hosts Ben and Kate.

Laura was detailing the chilly conditions across the country, and intended to say: 'Frosty start,' but accidentally said: 'Frosty fart.'

Ever-the-professional, the presenter continued the segment and hoped the on-air hiccup had gone unnoticed.

For more of the latest showbiz news from Daily Star, make sure you sign up to one of our newslettershere