ITV viewers watched as reporter Nick waited patiently alongside Mr Hancock as he wrapped up an interview with another broadcaster this morning. With GMB’s Piers and Susanna in his ear, Nick was encouraged to approach the Health Minister as the show nears 28 weeks without a Government minister having appeared on the show. However, when Nick probed Mr Hancock on appearing on the show via video link, he promptly walked off – which brought quite the reaction from GMB viewers.

“@NickDixonITV You are my actual hero,” said one GMB viewer on Twitter. “Best TV I have watched in months. #GMB @MattHancock.”

A second echoed: “Must say I did enjoy GMB chasing @MattHancock grow a pair.”

Another agreed: “@piersmorgan @susannareid100 that was great TV!!! Should do that every morning until they grow a pair on get on @GMB.” 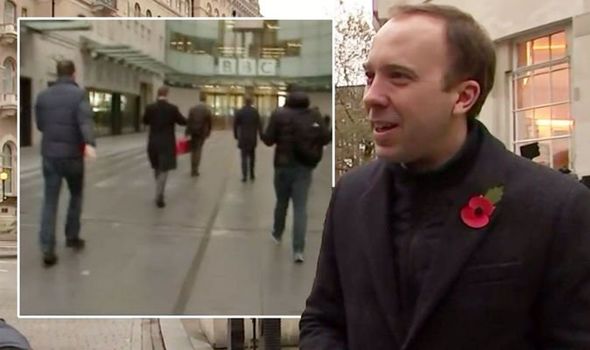 However, some GMB viewers did side with Mr Hancock, as one pointed out: “@GMB Says it all, Hancock happy to talk to GMB, just not @piersmorgan.

“Says it all really, Piers is the problem and why people don’t want to come on the show.”

While a second backed the Conservative: “Brilliantly handled @MattHancock, but please do not give in. We the people support the boycott of @GMB.”

And a third commented: “Now you can take that stupid Calendar down, oh hold on. Sorry, it’s not good enough for Morgan the mouth who only shouts & talks over interviewees.

“Hancock was asked to talk, he did. He had a prior interview when #GMB door stepped him, but he gave an interview. Now shut up!”