The ABC journalist will join the ranks of Amy Robach, Michael Strahan, George Stephanopolous, Robin Roberts, Ginger Zee and Lara Spencer as a co-host on the popular show – but fans are wondering who she’ll be replacing.

Janai is joining the weekend team, meaning she’ll take a seat alongside Whit Johnson and Eva Pilgrim and replace Dan Harris who left in 2021 after 21 years.

The weekday crew will remain the same, but Janai will bring some fresh talent to Saturday and Sunday.

The statement continued: “Janai is a versatile and talented journalist, whether she is anchoring at the desk, conducting a one-on-one interview with a newsmaker of the day, or reporting in the field on breaking news. 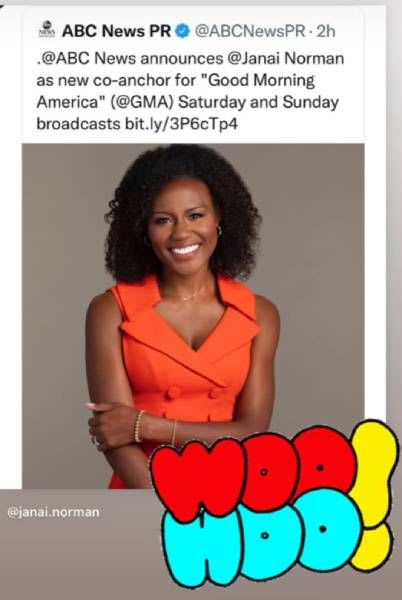 Ginger Zee was one of the first to congratulate Janai

“She puts her heart into her work and makes it a priority to cover the most important underreported issues of our time, including the maternal mortality crisis facing Black women and the stigma of mental health.”

Janai began working at ABC News as an intern in 2011 and returned there in 2016. This time she coverered politics as a reporter in Washington before becoming overnight anchor for World News Now and America This Morning.

Kim confirmed: “Most recently, Janai has hosted Pop News over the weekend, joining the team when the second hour launched on Saturdays in October 2019.”

GMA‘s chief meteorologist was one of the first to welcome Janai to the team and took to Instagram Stories with the news and exclaimed: “Woohoo”.