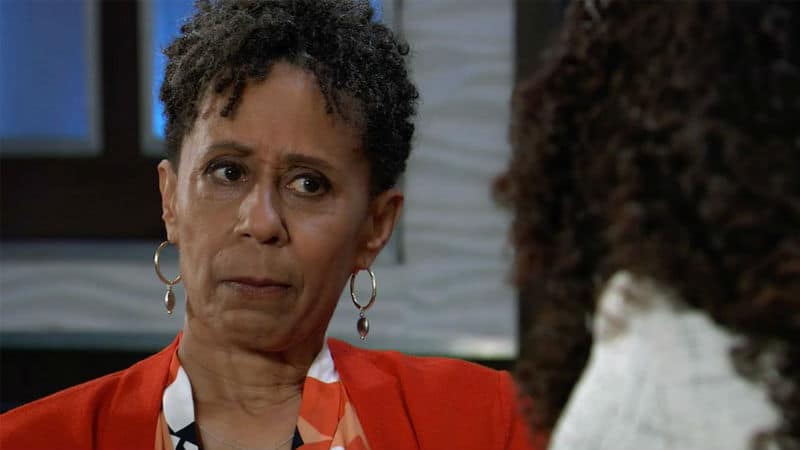 General Hospital spoilers for the Monday, October 29, 2018 episode of ABC’s soap promise a bucket of bad decisions leave a Port Charles guy down in the dumps, while a couple of ladies are demanding answers and taking names.

Curtis (Donnell Turner) and Jordan (Briana Nicole Henry) just can’t catch a break. These two set about to make merry and make wedding plans, but that stick in the mud, Aunt Stella (Vernee Watson) won’t have any of it. We understand that she doesn’t want Jordan to end up accidentally killing Curtis (it’s a long story), but can’t she see that’s he’s a grown man?

Look for her to kick up a fuss just as the planning gets underway. Is it just coincidence, or does the bad news that Curtis receives be Stella’s doing?

Carly (Laura Wright) is on a mission! She and Laura (Genie Francis) have suspicions about everyone’s fave sanitarium, Ferncliff. What could possibly go wrong?

These two go snooping around the place, something that could be beneficial for Kevin (Jon Lindstrom), but very dangerous for them.

When Carly was in Ferncliff, she had a mystery neighbor, enamored with Morse Code. Somehow, she can’t get this out of her mind and now, she wants to personally inspect every cell, er, room. Laura is right beside her, egging her on.

Even if Nelle does tell the truth about Jonah… would Michael believe her? @duelly @chloelanier123 @welcometolaurasworld #GH55 #GH #GeneralHospital

Meanwhile, Michael (Chad Duell) is in the dumps after the Nelle (Chloe Lanier) courtroom drama. She sure has a way of bringing out the worst in people!

He’s taking comfort in the bottle when Sonny (Maurice Benard) decides to take the bull by the horns. Will Sonny be able to save his son, or will his idea of a solution lead to more trouble? Spoilers reveal that Michael is about to find a new best friend.