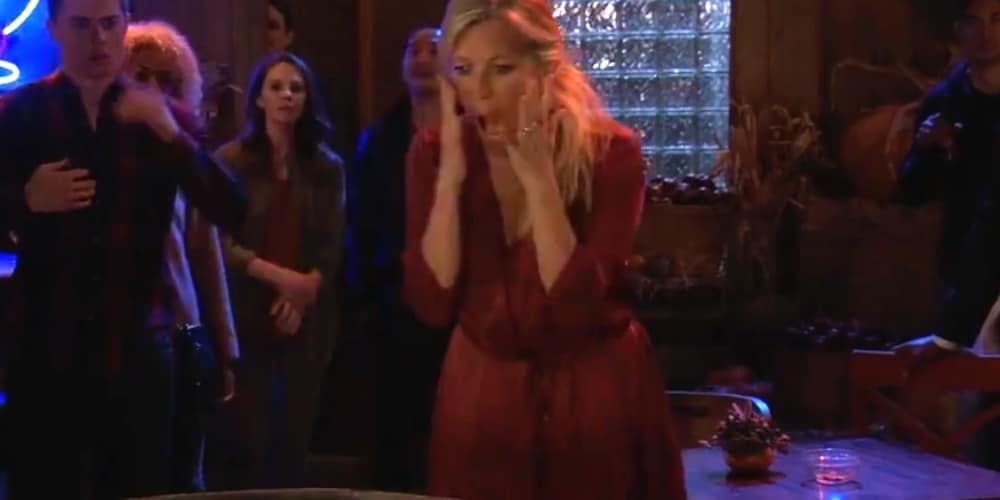 General Hospital spoilers for next week’s episodes of ABC’s sudser tease that Carly (Laura Wright) is loud and proud in the coming days. She’s had a rough time of it recently and going back to Ferncliff where she was locked up among the criminally insane was no picnic.

So why would she voluntarily go back? Because she’s Carly and she’s on a mission! Something just doesn’t sit right with her after being cooped up next to a Morse Code-loving cellmate. She and Laura (Genie Francis) are determined to get to the bottom of what’s rotten at Ferncliff but the end result leaves her a mess.

Next week she needs to lean on Stone Cold (Steve Burton) in order to sort out her post traumatic feelings about revisiting her old haunts. Then, later in the week she disrupts Laura (Genie Francis) which is unlike her.

Elsewhere Julian (William deVry) gets closer to Kim (Tamara Braun) as he tries to comfort her in the wake of Oscar’s (Garren Stitt) illness and emancipation proceedings. At the same time Cam’s (William Lipton) motives are suspect and Elizabeth (Rebecca Herbst) calls her son on what he’s up to.

The moment we’ve all been waiting for is just around the bend. Now that the Britch (Kelly Thiebaud) is back, and in fine fettle we must say, she and Brad (Parry Shen) hook up. These old partners in crime have a lot of catching up to do and Britt is gobsmacked to learn Brad’s secret! Who would have thought, Nelle (Chloe Lanier) is playing dirty tricks again! Is she any match for Britch?

Meanwhile Nelle’s ex, Michael (Chad Duell), is not on board with someone’s proposal. And, Lucas (Ryan Carnes) sees a different side of things next week. Does Brad spill all about the baby that really isn’t theirs?

Elsewhere Margaux (Elizabeth Hendricksen) starts her investigation while Curtis (Donnell Turner) offers his assistance: not necessarily in that order! And, Margaux’s boss Jordan is the recipient of less than happy news.

In the tween scene, we get to see Charlotte (Scarlett Fernandez) and Spencer (Nicolas Bechtel) in action. This ought to be fun! Spoilers reveal that the little lass has Spencer’s number, something he surely won’t cotton to!

General Hospital airs weekdays during the day on ABC.