Friday Night Dinner is celebrating 10 years since it originally aired in 2011 on Channel 4. Over the years it has amassed a loyal following of fans that go back to the show time and again. Jim Bell (played by Mark Heap) regularly showed up, uninvited, to the family get-togethers, always with his familiar greeting. But what does Shalom and other phrases mean?

What does Shalom mean in Friday Night Dinner?

Shalom is a Hebrew word used for when you meet or say goodbye to someone, it is a phrase predominantly used by Jewish people.

The word means peace, harmony, wholeness, completeness, and so on, and was regularly used by Jim Bell throughout the series.

The unwelcome guest always appears at the door, uttering the line before his involvement in the family party would ultimately lead to awkward situations.

However, this is not the only line the series has become known for, with fans often quoting a long list of familiar phrases.

Thanks to the tireless tool of the Urban Dictionary, many of these strange lines can be understood. 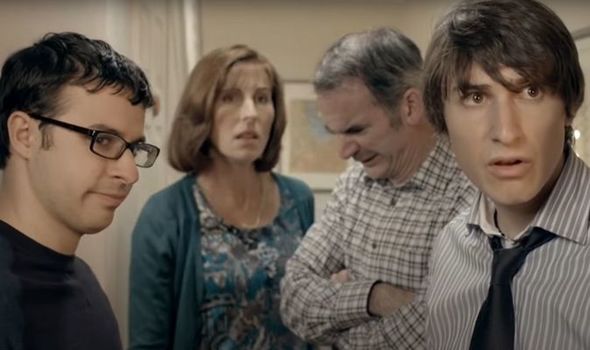 Fans will also be quick to recognise the line “lovely bit of squirrel” which was often said by the late Martin Goodman (Paul Ritter).

Martin’s unusual line, which literally just means a nice piece of meat, was just one of many reasons why he was such a loveable character.

From wandering around in the house in his pants to uncomfortable flirting with his wife, Jackie Goodman (Tamsin Greig), Martin was the go-to for off the wall moments.

Another line of Martin’s that he would often not make it five minutes without saying was “s*** on it” throughout the series.

This is another phrase that does what it says on the tin, literally meaning something bad has happened.