Former Real Housewives of Beverly Hills star Brandi Glanville has a message for her former friend and co-star, Lisa Vanderpump.

The Brandi Glanville Unfiltered host posted a message to the Vanderpump Rules star on Twitter Wednesday. Brandi wanted to know why Lisa talked about her if she is irrelevant and posted a tweet saying so.

“Dear LVP, You continually when on talk shows saying that I was irrelevant and you wouldn’t talk about me…but now on your OWN podcast you’re choosing to talk about me constantly so which is it? Also you have no idea what happened between Denise &I you were not there remember?”

Lisa gossiped about Brandi and Denise on her podcast

Lisa and her good friend Michael Turchin gossiped about the RHOBH ladies on her podcast All Things Vanderpump last month.

Michael filled Lisa in on all the details from the tenth season of the show. Lisa claimed to no longer watch the show but admitted to seeing the RHOBH drama play out on Twitter.

After Michael brought up the alleged sexual encounter between Brandi and Denise Richards, Lisa asked Michael, “What do you think they did exactly?” 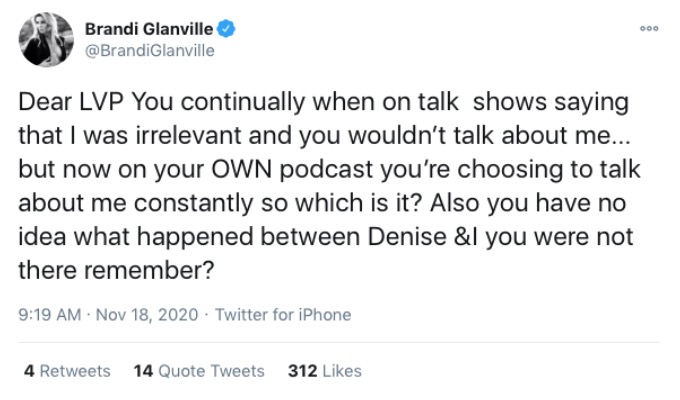 Fans sounded off in the comments

Fans weren’t too kind to Brandi in the comments section of her post.

“You did a shady thing to denise and choose to talk about it again and again boring lovely totally boring and LVP is fabulous,” another wrote.

“LVP is shady as hell. But so is Brandi… Both are liars. But if Brandi isn’t a liar, she’s a snitch…which may be worse…,” said another viewer.

“Girl I watched season 3 & 4 & you baited these women the whole time,” one fan of the show wrote. “Dropped adrianne & she got you on the show & then you played her, hooked up w everyone for a storyline (women & men) U know people are gonna talk about you. Look at you. You doin the same shit you did in 2013.”