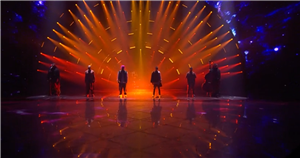 The long wait is over and its finally time for the Eurovision final.

Plenty of acts have gone on in the first half including bookie favourite Ukraine and their performance has blown away Eurovision viewers.

This has prompted an emotional response from viewers, especially at the end when the lead singer shouted "Stop the war. Help Mariupol. Save Azovstal!"

They wowed viewers and many have taken to twitter to show their support.

One viewer said: "Look past what’s happening in Ukraine it’s a fucking banger and deserves to win. #Eurovision "

Another said: "Emotional moment as Ukraine takes the stage at Eurovision. At the end, they ask the audience to please help Ukraine and Mariupol. #Eurovision "

A third wrote: "Goosebumps from Ukraine’s performance, and such a catchy song #Eurovision "

A forth penned: "Ukraine. Goosebumps. This song is so incredible and unlike anything else in the competition. If they win, they absolutely deserve it #Eurovision."

Ukraine are currently the favourites to win, with the UK's representative Sam Ryder a close second.

He is currently behind Ukraine in the latest betting odds, but his popularity on video platform TikTok could prove fruitful.

The singer, who rose to fame during lockdown, has over 12million followers and the most followed UK music artist on the video app.

Sam even found fans amongst the skyscrapers of New York City when Alicia Keys posted a video reacting to his cover of her song If I Ain't Got You.

But the singer is confident his song SPACE MAN is the perfect fit for this year's competition.

In an interview with Ken Bruce on Radio 2, Sam said: "I wrote this song about a year ago with two very close friends of mine and it was kind of the song that started my journey, got record labels interested… so I knew it was really important.

"Anyone that knows me knows that I overthink absolutely everything and I’m glad, though, that I over-thought this because having waited on it, we’ve been given this amazing opportunity with Eurovision to release it and give it it’s little moment in the world. I think it’s perfect for it."