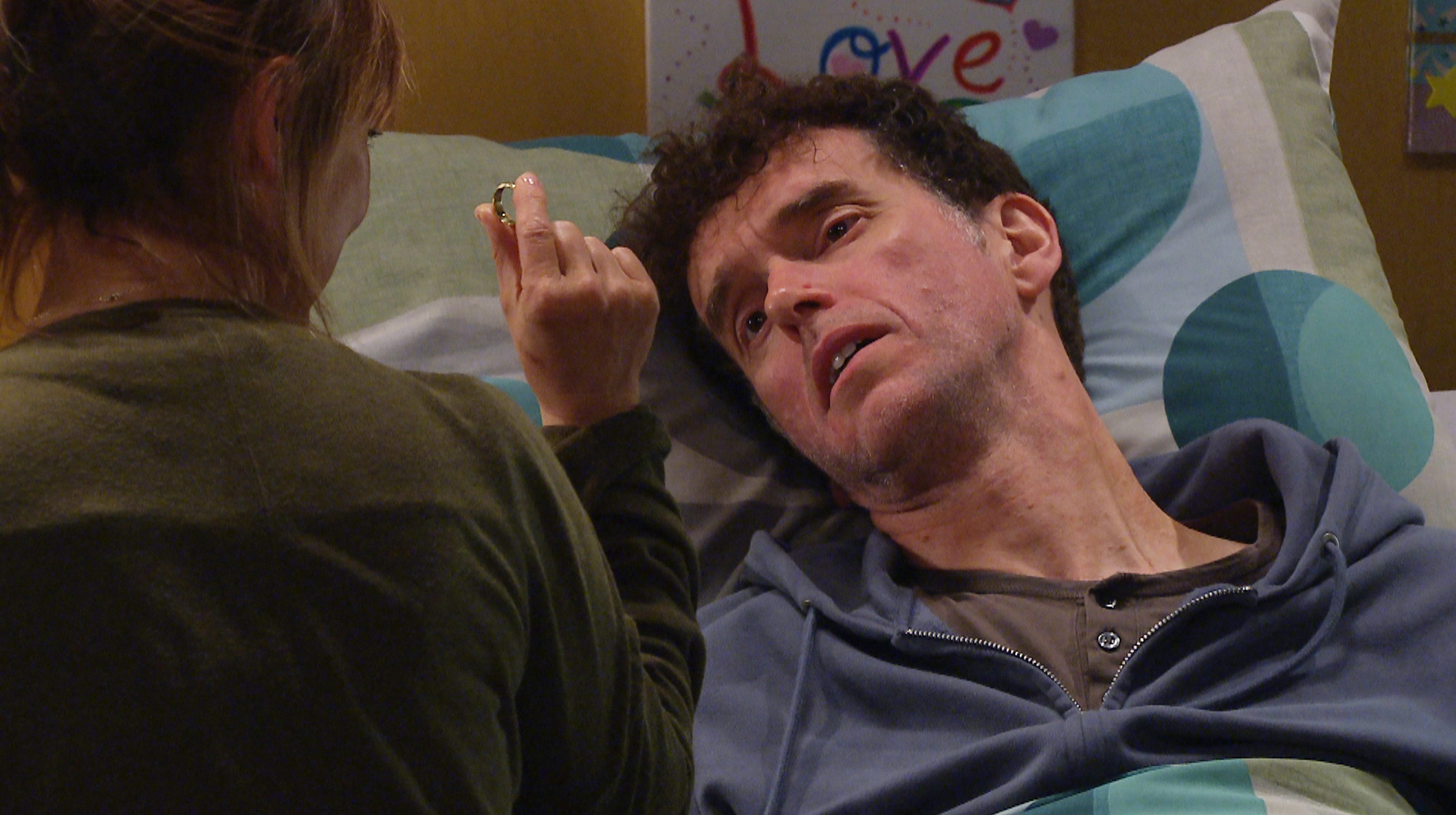 Emmerdale star Mark Charnock, who has played Marlon Dingle in the soap for 26 years, has revealed that the ongoing stroke storyline has taken a toll on his own physical health.

Marlon suffered the devastating stroke back in March. In hard-hitting scenes we saw him suddenly feel unwell and collapse.

By the time his daughter April (Amelia Flanagan) found him, he was unable to communicate with her and after being rushed to hospital it was confirmed that he’d had a stroke.

Emmerdale worked closely with the Stroke Association and people who’d experienced a stroke themselves to ensure Mark’s portrayal was accurate, though at the time he was keen to point out that, ‘Each stroke is different so there’s not really a blueprint as such.’

One thing that was vitally important to the Emmerdale team was that Marlon’s recovery had to happen at a realistic pace.

‘When it first started I was getting – you can take or leave social media sometimes – but I was getting “I know what’s going to happen here, he’s going to be better by…” and we just haven’t done it and the producers have steadfastly refused to go down that route, they just won’t do it,’ he commented to Metro.co.uk after winning three prizes for his performance at the Inside Soap awards.

And it’s this commitment to portraying Marlon’s disability accurately over the long term that has led to some problems for the actor, as he told Inside Soap recently.

‘I actually had to go and get my back sorted the other day,’ he said. ‘I’m constantly down on one side playing Marlon. Being tall, I’ve always had back issues, but it finally gave up on me the other day and I had to go and see somebody to sort it.’

Despite the physical difficulties, Mark says this storyline is ‘the best story I’ve ever had – and I’ve had some belters.’

Mark adds the stroke storyline has been a huge challenge, but he’s loved doing it.

‘As an actor, it’s been the biggest challenge I’ve had by far. It was great to be terrified by it because it made me remember how I care so much about the show,’ he says. ‘I just thought “I can’t let them down now they’ve given us this”, so I tried my best.’

His efforts have certainly paid off, with viewers united in praise for Mark’s touching performance that has seen him winning best serial drama performance at the National Television Awards, with wins in the British Soap Awards, Inside Soap Awards and TV Choice awards.