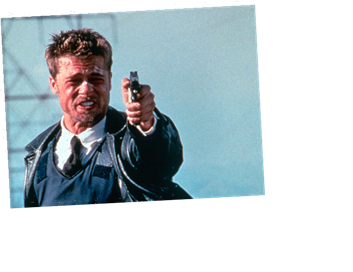 Edgar Wright has assembled the ultimate celebration of movie theaters as the guest editor of Empire magazine’s “The Greatest Cinema Moments Ever” edition. The “Baby Driver” And “Shaun of the Dead” filmmaker rounded up 40 of Hollywood’s biggest names to share their most memorable theater experience, from Steven Spielberg to Chris Evans, Patty Jenkins, Spike Lee, Kevin Feige, Taika Waititi, Tessa Thompson, and Daisy Ridley. Empire has published Wright’s personal top 10 list, which includes the time he took a first date to the movie theater to watch David Fincher’s “Seven.”

“I maybe unwisely went on a first date to see ‘Seven’ — a first and last date,” Wright said. “‘Seven’ is maybe not a great idea for a date movie. People mention the Sloth moment, which is an expertly engineered shock — and the ending. With twist endings, you always get this little wave of anticipation of what’s coming. And ‘Seven’ is an interesting one, because when you watch that with a crowd and people don’t know where it’s going, you can feel people getting what’s going to happen at different times — it’s catching in the audience. People are starting to realize, it’s dawning on them with horror, ‘What’s happening? What’s going to happen?’ That’s an exciting thing, the penny dropping for some of the audience about the contexts of a box before everybody gets it.”

A number of contemporary blockbusters made Wright’s top 10 list of the best theater experiences, including Alfonso Cuaron’s “Gravity” and George Miller’s “Mad Max: Fury Road,” the latter of which was so amazing to see on the big screen that Wright went to the theater four times in five days to re-watch it. Tarantino’s “Once Upon a Time in Hollywood” is also included, with Wright noting it was one of the few Tarantino films he saw in theaters without reading the script ahead of time.

“As soon as it was coming out, I said to my girlfriend, ‘We’ve gotta go and see that again on opening night! I just want to experience it with the audience,’” Wright said. “I’m paying money just to feel the vibe in the room. That’s a great feeling, where you’re getting a secondary hit from the movie. That’s a wild film to see with a packed house who don’t really know how exactly it’s going to pan out.”