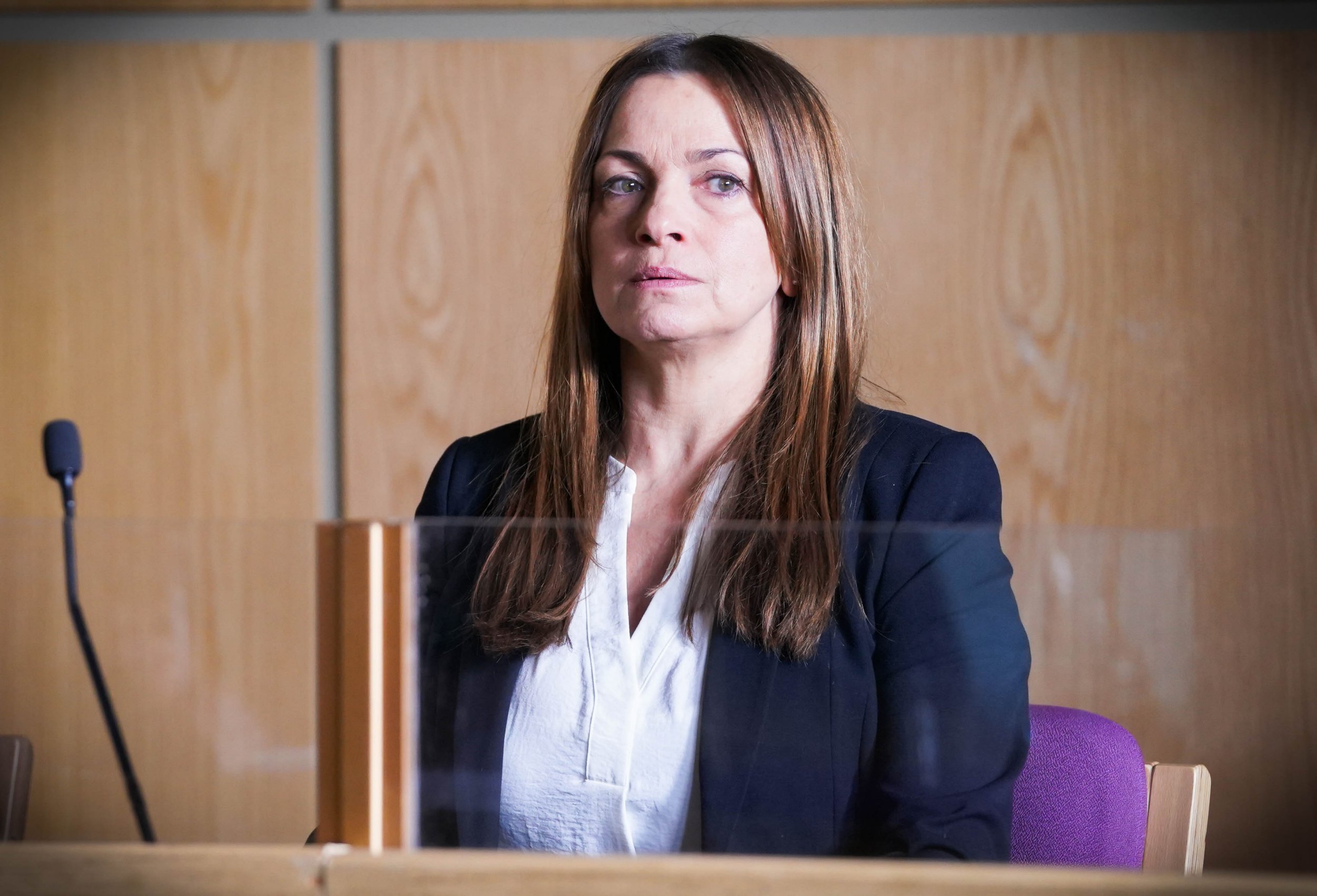 This is the moment where sinister and manipulative Katy Lewis (Simone Lahbib) faces her court case for her historic abuse of Mick Carter (Danny Dyer) in EastEnders.

Katy has been confident that she will get away with the abuse but ahead of tonight’s verdict, Metro.co.uk caught up with actress Simone Lahbib who discussed Katy’s psychology, why she took on the role and whether her alter ego feels any empathy.

Did you have any reservations about taking on the role of Katy?

Well, I remember reading the scenes and straight away recognising that it was a really complex, interesting character and I think the fact that her going back and Mick being older, it’s not really exploring the whole paedophile element.

The scenes focused on the continued abuse but it was more psychological. If it had been exploring the sexual side and I was having to act with children, that would have been a whole different thing. Danny and I chatted it through and spoke to length with Jon Sen, I knew from that they were being really responsible and had done the research and had backup from the charities.

I felt like I was in safe hands. It wasn’t until Jon called and asked if I had any apprehensions, I remember saying Should I!? What should I be worried about!?’ He explained the whole trolling thing on social media but happily, there has been none of that. I think everyone’s been really supportive and I have had lots of messages of support for the storyline being well portrayed and responsibly told.

Also, doing it in the time of lockdown and masks – I am still able to go to the shops and not have people yelling ‘paedophile’ at me. That would take some explaining to my mum!

She’s a very chilling character – were fans surprised to see you in the role?

To be honest with you, people that are fans of Bad Girls or other shows that I have done – I have always played empathetic and vulnerable characters; the good guys. I have played a few nasties, that is coming into my career more and more – I did a guest spot on Vera and she was nasty so that was great fun to play!

There’s been a few tweets saying I loved you in these other shows. I hate Katy but I still love you! That’s quite nice.

Has it been challenging to take on?

It’s been very challenging yes but not as in that I couldn’t do it – I wouldn’t taken the role if I couldn’t understand the abusive side of the character. I do a lot of research in psychology so I felt I had an idea of how I wanted to play her.

When it came to playing the New Year episodes, that was great to play. I had a real rush of adrenaline, almost like walking on stage for a first night. I remember at the end of that, all of that really two hand juicy stuff, I recall really feeling I’d miss playing such a psychologically interesting character, whenever it came to an end.

Does Katy have any remorse or does she genuinely believe she isn’t in the wrong?

It’s a really interesting question. I kind of played Katy that her emotional development is that she doesn’t have empathy, she doesn’t feel things the same way.

Some of her speech was a bit of gaslighting and manipulating to Mick but she almost believed some of the awful things she says like I was in my prime, most real men would have jumped at the chance, I could have had any man and I chose you!’ It’s like a story with no roots, it comes from a different place than someone with a healthy state of mind. Everything is from her head, not from the heart and that’s how I played it.

She is always trying to get out of a situation and trying to win. ‘How will people see me?’ The relationship with Frankie is interesting – that’s the closest thing to an emotional connection and even then it’s disturbed, warped and unhealthy which is why Frankie has certain problems.

Now she is an age of questioning Katy, it would have been easier for Katy when Frankie was young; she might have even felt like she was a normal person when pushing her daughter on a swing. She’s a very complex, broken, twisted character – a lot of sickness in there.

Would you ever be up for a Bad Girls revival?

It’s interesting you should say that! We do Bad Girls Reunion Events, we have the third one coming up in September. DIVA magazine are on board as our official media partner so we did this panel chat and brought in some of the cast and we had a chat.

It came up and there was various people from the TV industry there – DIVA are behind getting a revival on the go. There’s definitely interest in it. If it was approached well, a lot of years have passed, the system has changed so it would be interesting if written right.

EastEnders airs the fate of Katy on Friday 20 May at 8:35pm on BBC One.