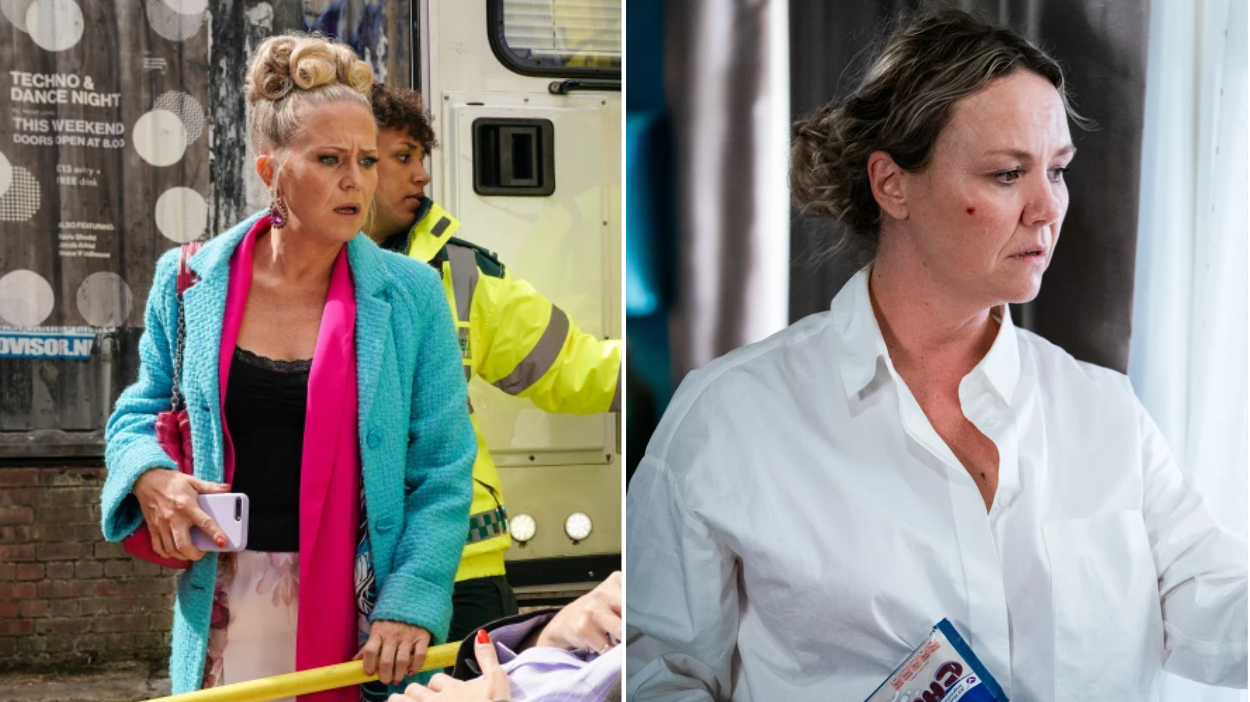 The biggest risk to Janine Butcher’s (Charlie Brooks) happy ever after with Mick Carter (Danny Dyer) is his enduring love for Linda (Kellie Bright) in EastEnders – and she knows it!

It’s no secret to anyone, including themselves, that there are still intense feelings there and, despite Janine’s desperation to get Mick down the aisle, it won’t fix the understandable paranoia that she feels.

Actress Charlie reckons Janine’s abandonment fears make her more susceptible to terror of losing Mick – and it’s evident from her colourful past that she will dangerously lash out if she loses everything.

This is why she is so scared of Linda – she knows that she practically has all she wants in her hands and can crush it into dust at a moment’s notice.

‘I think she so desperately wants to believe that nothing’s going on and that Mick adores her, and she says that quite openly,’ the actress sighed when discussing Janine’s fears.

‘But I think you just know, don’t you? It’s deep-rooted. That is her fear and her panic, especially the confirmation from Sonia when she’s seen Mick and Linda together, and it looked very intimate.

‘That put the fear of God in her. Her behaviour is warranted, I’d say, in many ways.

‘Had Linda and Mick not gotten close again and had they not really been still in love, then she would have nothing to worry about.

‘Janine would have been happy and secure in the relationship. But they have, and there is a closeness, and that’s very evident, and that is why Janine behaves the way she does.’

To be fair, despite what she has done in the past (RIP Barry), we can’t help but feel a bit sorry for Janine.

It must be hard to see the close bond they share become more intense again.

‘The memories and the closeness are something she will never have.’

Mick and Linda may well, as a result, find themselves on the receiving end of Janine’s rage.

‘Janine won’t change her colours, and if someone turns on her, she will be the first person to retaliate,’ Charlie warned us.

‘If she feels like all hope is lost, then you will feel her wrath. My version of Janine is that there’s a deep self-loathing in her and hurt people hurt people, don’t they?

‘There’s a sadness to her, I think. What’s going on underneath is a very small child, a little girl who’s totally lost and trying to survive and has never felt looked after.

‘There’s been abandonment, she’s had trauma, and it plays out in all the wrong ways.’

It’s fair to say Janine fears Linda – but let’s be fair, Linda should fear her love rival even more.