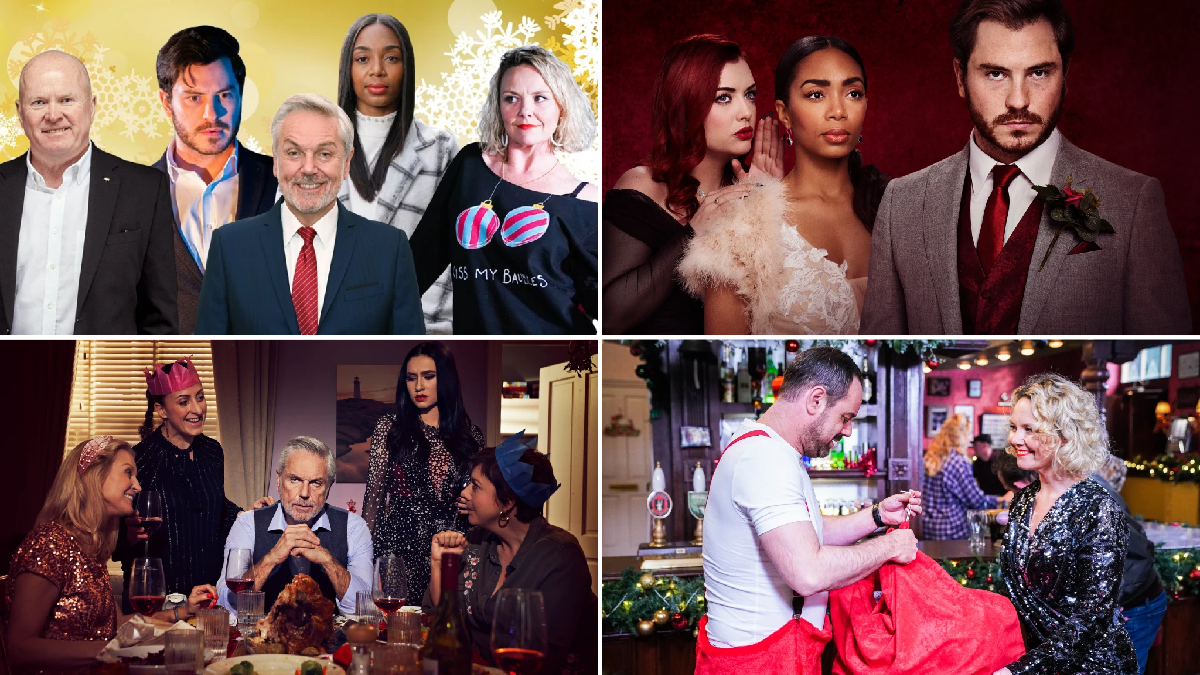 Another person facing exposure is Rocky (Brian Conley) as Dotty Cotton (Milley Zero) pulls the plug on their scam in a public way.

Elsewhere, Janine Butcher (Charlie Brooks) is up to her old tricks as she targets Mick Carter (Danny Dyer)…

It’s the day of the Christmas weddings. Whitney is still determined to go through with her plan to expose Gray’s guilt.

Whitney braces herself and tells Chelsea that Gray killed Chantelle. Chelsea is shocked by the bombshell, but will she believe Whitney’s claims or go through with the wedding?

At the same time, Gray and Denise wait for their respective partners but they’re nowhere to be seen.

Sharon’s arrival for Christmas lunch with the Slaters comes as a surprise, as Phil hadn’t told anyone.

Kat gets annoyed over Sharon and Phil’s connection as they reminisce over the past, but the day takes a turn when they realise the kids are missing. Stacey is shocked by what she sees when she looks through the window.

Janine tries to get Mick to herself. She schemes by convincing Zack that Nancy still likes him and he should ask her out.

Later, there’s chaos at The Vic as everyone learns what happened on Christmas Day.

Never Rains but pours (a drink)

Rainie and Callum try to talk to Stuart, but they struggle to get anywhere. Rainie seeks a distraction by partying at The Albert, where a handsome man sends her a drink.

Bobby and Dana plan something special. Dana later tells Bobby that she wants to learn more about Islam and visit the mosque.

Janine notices how much Mick is struggling and finally puts two and two together over the reasons why. Nancy becomes annoyed with Janine for her recent meddling with Zack.

Later, Mick announces that he plans to bring his family back together.

Stacey decides to apply for a job as the new market inspector, but later discovers that Martin is also in the running. Stacey receives a grilling at her interview and faces added pressure due to Eve adding embellishments to her CV.

Later, the job interviewer is unimpressed to see Eve and Stacey in an argument with Ash.

Phil is unhappy as Denise doesn’t want him to see Raymond until after New Year. Kat arrives to see Denise, wanting a favour.

Mick is desperate to talk to Linda. Stuart suggests that Mick should create the perfect party for his family. Mick ends up opening up to Nancy.

At the same time, Billy mentions Linda’s alcoholism, which causes Janine’s mind to go into overdrive.

Kat got your tongue?

Phil is pleased to be spending time with Raymond, but things take a turn once Phil is out of earshot.

When Sharon invites Phil and Kat to come to The Albert later, she realises that Kat is hiding something.

Martin gives Sonia a ticket for The Albert tonight and tells her that he got the job.

Mick is pleased that his plan is coming together, while Nancy is excited to tell Janine to start packing. Nancy also decides to seek support from Zack.

Kat admits the truth when Sharon questions her. Phil overhears this and confronts Denise, who issues a warning.

Kat panics over the escalating situation, while Sharon knows that Phil is up to something. At the same time, Denise fears the possibility of Phil retaliating.

The New Year’s Eve party gets under way at The Vic. Zack and Nancy take a trip with the hope of resolving things before 2022 begins.

As tensions run high between the Carters, Nancy gives Mick an ultimatum.

Ash has a drink with Suki at The Vic, but a comment from Eve leads to upset for Ash.

Bobby on the beat

Bobby and Iqra continue campaigning but when Iqra tells him her new job wants her to start soon, she worries about leaving Walford. Bobby assures her that she’ll do great and that Mila and Kioni will be with her soon. Later, Harvey contemplates his next move with Aaron and some wise words from Dana make his mind up.

Mick is distracted as Shirley recommends that he tells Ollie the truth but he is less than pleased when he discovers he has a new house guest.

Kat and Sharon make a discovery and they have to choose their next move carefully. Unfortunately they haven’t been as discreet as they hoped and Kim sees what they’re up to, the countdown is. Phil realises that all might not go to plan so makes a huge offer

Over at The Vic, Ben suggests to Callum that they go out, Eve overhears and invites herself along with Stacey. The group are glammed up for their night, spotting Ash they ask her to join and she’s hesitant but when Suki chimes in she defiantly agrees to go with them, leaving her mum simmering with rage. They all head to the station and things quickly take a turn for the worse

Honey meets Suki. Suki admits she said some things she regrets to her daughter, she later tries to apologise and gets spooked. Honey asks Suki an important question? Suki forcefully admits the truth. Honey tries to sympathise but Suki storms out. Riled up from earlier Suki spots Peter and is determined to prove a point – she takes him home for the night.

Mitch has been kipping on the sofa after a leak in his bedroom and as the family are looking after Banjo, he’s forced to share the sofa with him. Fed up, he asks both Mick and Billy if he can stay with them with no success. Later, when Karen finds Mitch sleeping in the laundrette, she gives in and says they can share a room for the time being.

Suki is not impressed when Peter knocks to say he left his watch, he goes to the bedroom to grab it as the door goes.

Ash goads her mum causing Suki to lash out in front of Callum who threatens to report her. Suki tries to apologise, but Ash has been given some advice and gives her mum a chance to prove her wrong. Vinny and Kheerat are disgusted at what Suki has done.

Phil is hopeful and begins to weave a web of lies.