Over the past few weeks EastEnders fans have watched as young couple Amy Mitchell (Ellie Dadd) and Denzel Danes (Jaden Ladega) feelings for one another have developed. Although there’s been clear reservations from Amy’s dad, Jack Branning (Scott Maslen), who has made it clear he doesn’t approve of the pairing. In upcoming scenes, viewers are about to see Patrick Trueman (Rudolph Walker) offer some advice which could lead to the pair becoming official however, there’s heartbreak when the couple’s friends discover the gesture.

Since Denzel, the estranged son of Howie Danes and ex-partner Delilah, arrived in Albert Square in August he struck up a bond with 13-year-old Amy Mitchell.

Over the past few months, the duo got closer and developed feelings for each other, much to Jack Branning’s dismay after his daughter started acting up to impress the newcomer.

Although Denzel had nothing to do with the situation, Jack blamed him after his daughter was rushed to the hospital when she took drugs and collapsed.

Knowing her dad doesn’t approve of her love interest, the young couple have tried to keep their whereabouts hidden, although in upcoming episodes they’re spotted. 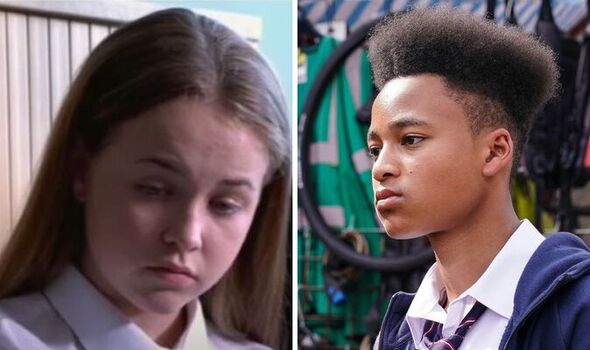 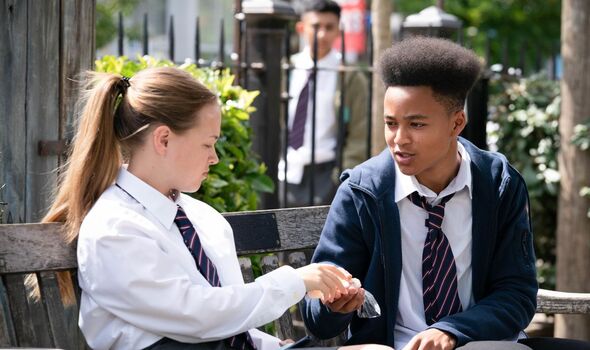 In scenes set to air next week, the duo decide to bunk off of school to spend some time together, however, their time is ruined when Chelsea (Zaraah Abrahams) catches them.

Mortified they’ve been caught together when they should be in school, Amy pleads with Chelsea that she doesn’t tell Jack, who has arrived home early.

Chelsea decides to cover for them both as Denzel makes a secret exit to escape being caught by Amy’s dad.

Although Jack has clocked that something isn’t right and suspects that Chelsea is hiding something from him, unaware it involves the young boy he doesn’t want near his daughter. 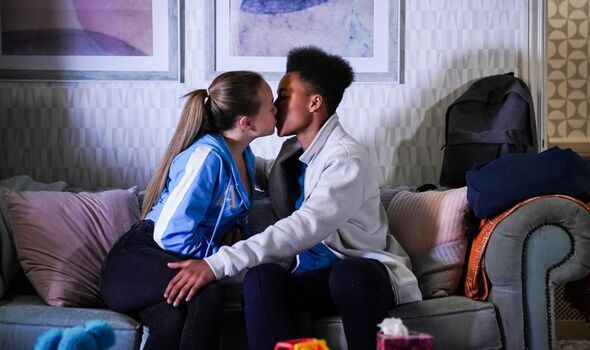 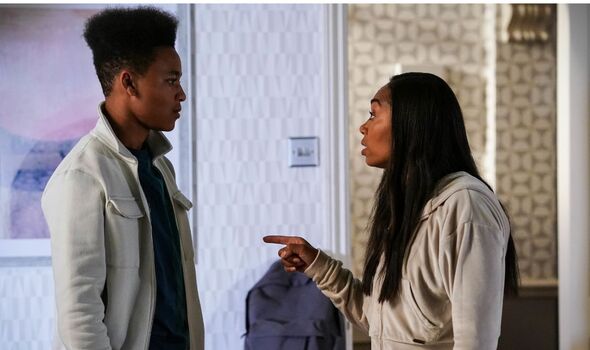 Making his dash, Denzel heads home to then be grilled by Patrick on his whereabouts before he confesses that he has feelings for someone.

Giving some helpful advice, Patrick decides to tell the teen that he should get his crush a gift as a romantic gesture.

Listening to his words, Denzel decides to get Amy a phone case with a personal touch as he decides to confess he wants to become exclusive.

However, the sweet moment is quickly interrupted when Nugget, Lily and Tommy arrive.

The trio decide to mock Amy and the gift that Denzel has got her which leaves the young couple feeling hurt and embarrassed afterwards.

As Nugget and Lily continue to mock them, Amy and Denzel are both left feeling the pressure from their friends on the next stage of their relationship.

A new theory suggested by Express.co.uk suggests that the humiliation is too much for Denzel who quickly takes back his gift and decides to call things off with Amy.

Deeply hurt, Amy runs home in tears where she’s greeted by Jack and Chelsea where she confesses everything that’s happened from skipping school to getting dumped.

With his daughter in tears, how will Jack react to her lies? Will he comfort her over the heartbreak or scowl at her for getting involved with Denzel in the first place?

It looks as though Amy may not be the only person in the house set for heartbreak as next week Denise Fox (played by Diane Parish) notices how close her husband and Chelsea are getting.

She walks in on the duo after Jack tells her he can’t lend her money again without raising suspicion from her mum.

Unaware of Chelsea’s financial problems, could she suspect there are still underlying feelings from their brief encounter several years ago?

EastEnders airs on BBC One from Monday to Friday at 7.30pm.