A suspicious Mel (Tamzin Outhwaite) has recently recruited her old flame Jack Branning to dig for dirt on Ray – convinced that he’s keeping something from her.

However, Thursday’s episode will see Mel forced to come clean with Ray about what she’s been up to, after he spots her conspiring with Jack in the Square.

After a furious Ray confronts Mel over her actions, she decides to call off her arrangement with Jack – insisting she doesn’t want to know anything else. 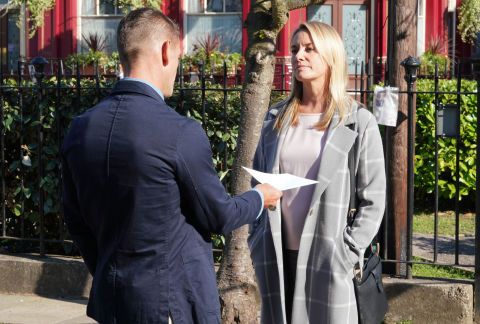 But despite having made peace with Ray, Mel is left suspicious all over again when he receives an urgent phone call at the pub and rushes off.

Realising that she needs to hear what Jack has learned about Ray after all, Mel turns back to him for information later on.

As Mel puts the pieces of the puzzle together, she makes a shocking discovery – but what has she found out? And where will this leave her relationship with Ray?

EastEnders airs these scenes tonight at 7.30pm on BBC One.

Digital Spy Soap Scoop video – hit play below for all the latest EastEnders spoilers, as Ruby faces a difficult decision and Dot pays a visit to Doctor Legg.