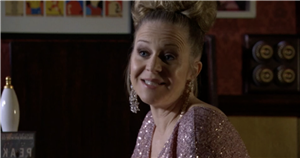 EastEnders viewers are convinced that Linda Carter (Kellie Bright) will hand over her baby to Stuart (Ricky Champ) and Rainie Highway (Tanya Franks).

The pregnant Queen Vic landlady is struggling in the wake of discovering that she’s pregnant with Max Branning’s (Jake Wood) baby.

She cheated on her husband Mick (Danny Dyer) with Max last year, and has since discovered that she’s carrying the Walford lothario’s child.

In the wake of Max kidnapping Abi, Linda and Mick decide that they will raise the baby as their own child, telling their neighbours that Linda is five months gone instead of six.

Linda told her husband: "The situation’s changed, Mick. I saw Rainie’s face this morning. I don’t ever want to be in her shoes." "We say I’m five months instead of six. No one would ever know."

Mick agreed to her proposition and they later unveiled Linda’s pregnancy to the punters in The Queen Vic, who toast to the new arrival.

However, fans think that the couple will end up changing their mind and handing up the child for adoption.

In a shock coincidence, Mick's former best pal Stuart and his wife Rainie desperately want a child of their own. The couple discussed the possibility of using a surrogate with Bernie Taylor (Clair Norris) in recent scenes.

However, Rainie is still uncertain that this is the best way forward, and therefore is exploring alternative options.

Fans are now wondering if Linda will let Stuart and Rainie adopt her baby.

Taking to Twitter, one fan penned: "I wonder if she’ll change her mind about having the baby adopted and let Rainie and Stuart have the baby."

Another added: "Linda is totally going to give her baby to Rainie and Stuart, I’m calling it now."

While a fourth person wrote: "How exactly are Mick & Linda gona explain the baby being born so early? Also what if it comes out looking more like a Branning than a Carter?"

Mick accidentally missed Linda's baby scan during the first of Tuesday's double bill on BBC One.

He was forced to help his cab driver Jeanette (played by Danny's real-life daughter Dani Dyer) after her waters broke during a taxi ride to the hospital.

EastEnders continues Wednesday on BBC One at 7.35pm and 7.55pm