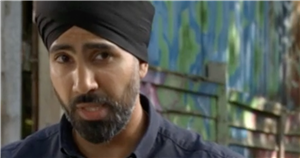 Kheerat Panesar was released from a night in the cells on Thursday's episode of EastEnders, after the police hauled him off for questioning over to the attack on Simon Atmore.

But although he came out of prison unscathed, viewers believed Kheerat would be rather annoyed when he finally discovers the truth about Ben Mitchell and Callum Highways involvement.

Ben and Callum failed to protect Kheerat's brother Jags Panesar while in prison- something they had originally agreed to do.

Kheerat paid Ben to keep Jag's safe while behind bars, but unfortunately Jags was killed.

Due to this, Ben and Callum were clearly on tenterhooks.

After seeing the events unfold, EastEnders fans shared their views on Twitter.

One fan tweeted: "If kheerat only knew the truth what Ben did."

While another viewer commented: "I think Ben is going to lose the Arches completely once Kheerat finds out."

A third penned: "Kheerat, make sure you don't forget the 'protection' that wretch who knows nothing about loyalty called Ben Mitchell gave your brother – and you pay him back good and proper in due course. And as for his sidekick Callum – nothing worse than a bent copper."

"If only you knew what Ben is capable of Kheerat," a fourth said.

But will Ben finally tell the truth about what happened to Jags?

Later on in the show, Suki Panesar confessed her involvement in her son's Jags death and how she put him in prison.