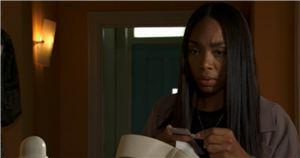 Viewers saw Chelsea pull a test out of her bag, and upon a second glance, spotted that it had two clear lines on the stick, showing a positive result.

Chelsea appeared completely shocked, and headed straight over to Gray's, seemingly to spill the news – but Whitney Dean's arrival stumped her.

As Chelsea prepared to tell Gray the truth, Whitney walked in behind him, which caused Chelsea to instead ask if they'd seen her headphones.

While fans were watching the scenes unravel, they couldn't help but be concerned for the mum-to-be.

Taking to Twitter, one user wrote: "I think Chelsea could be pregnant with Gray's baby…"

Meanwhile, others were left entirely concerned for Chelsea, particularly because it looks like she's carrying the baby of a brutal killer.

Another said: "Chelsea is up the duff with a murderers baby…"

In EastEnders spoilers, it was revealed that in upcoming episodes Whitney spots the test in Chelsea's bag, but hides her initial shock – but she later starts digging.

Whitney is set to quiz Chelsea about her pregnancy – but could this lead to tension between Gray and Whitney, and if so, could it lead to Chelsea's demise?

Fans have been adamant that Chelsea would be Gray's next victim for some time, but she's kept her distance from him since their split.

Evil Gray has savagely murdered three people since his time on the soap, with his first killing taking place last September after he murdered his wife Chantelle.

Months later, once Tina Carter learned the truth, he also killed her, most recently, Gray's infatuation with Whitney Dean resulted in him murdering her boyfriend Kush as he pushed him in front of a tube train.

Both Chelsea and Whitney have remained safe from Gray's evil serial killer ways for now, but fans have been adamant that one of them will meet a harrowing end.

EastEnders resumes Thursday at 7:30pm on BBC One.