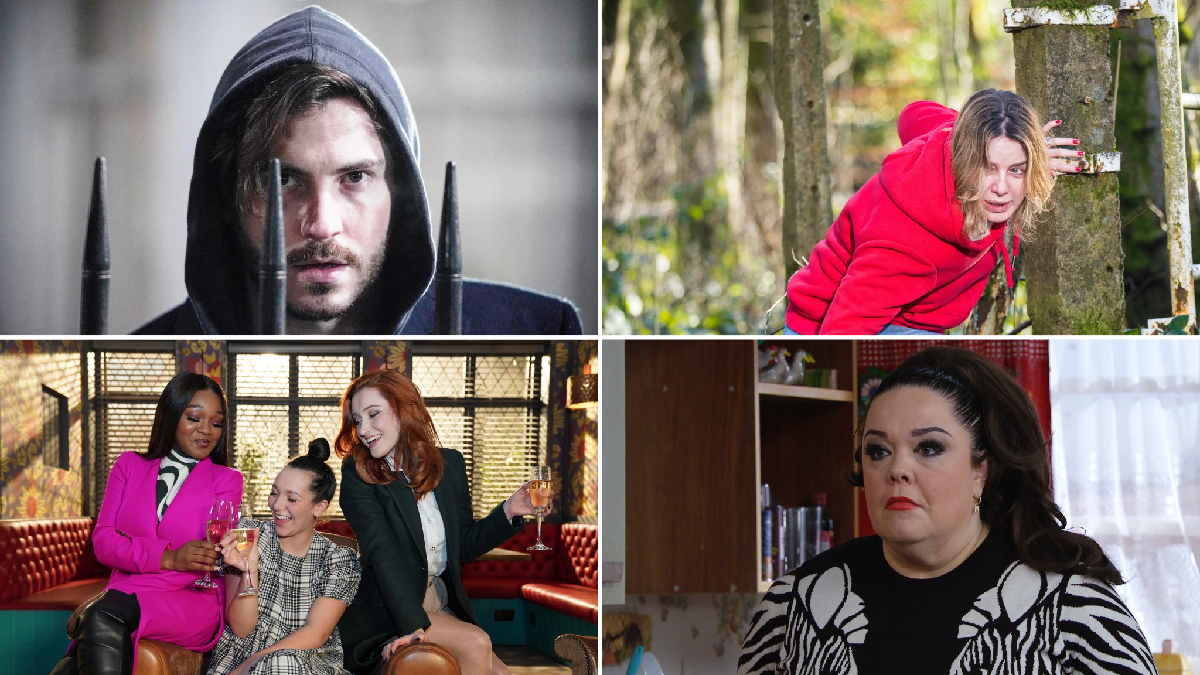 The soaps are moving schedules in a big shake up next week; and they are marking the occasion with some seriously major storylines.

EastEnders has a particularly mammoth week as the saga of Gray Atkins (Toby-Alexander SMith) reaches a nail-biting climax in shocking scenes while Hollyoaks marks International Women’s Day with a special episode.

Over in Coronation Street, the focus is on Abi Franklin’s (Sally Carman) downward spiral as disaster strikes in a very dangerous way and Emmerdale’s Meena Jutla (Paige Sandhu) executes her next wicked plan.

Here are the big spoilers you can look ahead to.

Whitney discovers that Gray was the one behind Tina’s death and Mick and Shirley are shattered to the core. Before long, Shirley is hammering on his door, wanting revenge…

As Suki worries for him, Kheerat arrives back in the Square, avoiding detection. He joins up with Whitney, knowing they have to save Chelsea.

Gray is determined to get out of the Square and hides from his enemies. But his attempt to get away is thwarted.

Gray hopes that Chelsea will go with him as he goes on the run but she stands up to him. She is left horrified when Jordan disappears.

Whitney and Gray come face to face in an intense showdown as several residents plot to take the killer down.

Fleeing for his life, Gray legs it out of the Square but his enemies close in as his desperate escape ends in a terrifying fashion.

Rainie offers Rocky a job in the parlour and after a difficult start, he desperately tries to impress Jay.

Abi’s life continues to spiral out of control and Kevin is disgusted by her behaviour as she seeks drugs. Before long, Tyrone finds her in a bad way.

With Dean, Abi steals a car from the garage but as things intensify, he leaves Abi at the side of the road and a dangerous situation unfolds.

Lydia warns Adam that she hasn’t finished with him yet and she is true to her word. As she takes her next act of vengeance, Adam looks set to lose everything.

Nick is worried about Sam’s confidence so Roy engineers a chess game between the youngster and Brian – which he winds.

Kelly is stunned when Laura returns and she is in a bad way. And Gary is filled with fear when she hires a PI to find out what really happened to RIck.

Emma enjoys a date with Jon as their relationship develops but the guilt of what happened with Ted gnaws at her.

Daisy is not impressed when Daniel’s ex Nicky arrives and finds herself lying to Daniel about seeing her.

Manpreet visits Meena in prison and is goaded into slapping her. Later she is relieved to hear that Meena plans to plead guilty.

Meena turns the tables however and sets out to frame her sister for Andrea’s death. Soon, Manpreet is being questioned by police.

Mandy is hurt when she finds out Vinny and Liv are already married. Vinny tries to thaw the situation with a moving invitation for Mandy.

The special day is upstaged as the feud between Charity and Chas explodes – leading to an almighty food fight.

Rhona gets down on one knee and proposes to Marlon but the moment is interrupted by the arrival of her mum Mary.

Liam and Wendy are horrified when abusive messages are sent to the practice in the wake of what Meena did.

In a special episode, Verity calls out Tony’s misogynistic comments but soon she has another surprise.

Charlie is furious with Ella over recent events but as tensions mount, he makes a confession.

Feeling the guilt of the inheritance he stole, James engineers it so that Donna-Marie is in the frame.

Ste determines to confront Ethan but the tables are turned when Ethan plays his ace card – he can take Ste down with evidence of what happened.